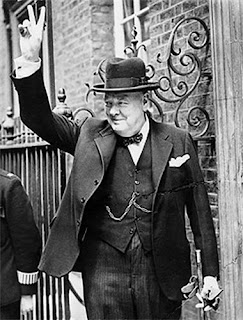 All people in the UK know what is on one side of a pound coin (or any coin for that matter) - the Queen's head. Even most people can guess how many times since it's introduction in 1983, the Queen's head has changed as she gracefully ages (three..I think..open to correction thanks..). But how many people know how many different 'tails' sides there have been? Who cares? We only really care about our Queen - or better said what she represents, a symbol of our country and reign. Can we not isolate ourselves like this?

In England I was called 'weird' for eating ice cream with hot Italian espresso coffee poured over. In Italy they would call you weird for saying 'you're weird'. Not many other Europeans in other European countries would say it was weird, but in Britain many would. We really do seem to be an island cut off from the rest of Europe sometimes.

As proud as we are, myself included, that we have never been conquered since 1066, our pride could also be a road to downfall. Our inability to integrate in to the rest of Europe. We are so capable of shooting ourselves in the foot with our own arrogance. We can isolate ourselves.

Brits on the piss in Spain. Ever since the '80s there is this image, an almost 'proud' state to be in. Do we know how we look in the eyes of the Spanish or other countries for that matter? Like my friend was saying about Brits in the States when he studied there; obnoxiousness reigns as guys go around saying what they want to American girls, thinking it is ok because girls there just 'luuurve our accents'... Hmm... I think we will find that they said they like English 'gentleman'. And we certainly don't have an image of gentlemen in Spain either...

Don't get me wrong, I'm 100% British, my Italian friends despite them saying "By now you're Italian" know it too. I do say it loud and proud when needed. But I love Italy, whatever happens in the future, a strange kind of love affair will always remain. The stereotype image of any country always prevails, in our case the gentleman with bowler hat and brolly. But we also have a stereotype image of our travelling groups of lad football fans as ALL being hooligans. How far from the truth.

The thing is, do we want to be known around Europe as gentleman or hooligans? Hooligans are known as 'hard nuts' who want respect for their doings. Yes, they are feared. Yet hooligans aren't 'hard' in the right respect of the word. Winston Churchill was hard. A real hard nut to crack. And he was a respected gent. We need a nation of Churchills, not Chelsea headhunters wherever we go or live.
Email Post
Labels: People