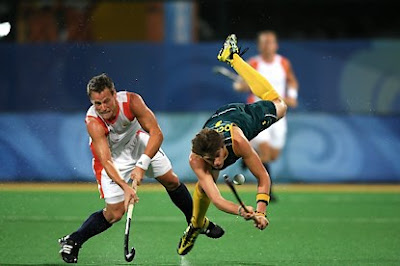 The summer is safely tucked away for another year and we are well on our way towards winter. As much as I like lazing on a beach and try to hang on to those hot sunny days by the fingernails as far in to September as possible, there is something that I quite like as we go headlong in to winter. Weekends.

Weekends on a beach are great, but as the last sunbathing rays set and people start groaning about the summer ending I actually look forward to my wintery weekends. I am not talking about the weather, even though since I have been living in Italy for so long, I now realise how difficult it is to live in England where a grey blanket of sky often looms over. But as long as the sun is there I don't mind how cold it gets.

I am really talking about how my weekends are in the winter. Saturdays, most of all. On Saturday we have our hockey league game and all the sweat and effort of training during the week after slogging it at work all day beforehand comes to the altar. It is where I get to run around and be 'manly'. That is to say, be aggressive, competitive and almost kidlike. It is also where I belong - on a hockey field with a group of guys fighting for one cause. I also belong in the 'sacred Beer Hut' at pitchside with the same group of guys as soon as we walk off the playing area to celebrate or commiserate the result. If the weather is still nice enough then maybe a barbequesque dinner is also thrown in, with more beer. And more beer. It is where my English roots have dug a place in Italian soil.

If there is no Barbeque, it is on to a restaurant or even better, one of my teammates' place for dinner. And more beer. Then a few bars and a club to continue celebrating or commiserating. Beer. Mojitos. Cuba libres. Because even if it is just a hockey league match, if we win it is one of life's little things that just has to be celebrated. It is quite simply where a group of guys (I hasten to add that girlfriends are always more than welcome on these occasions) are all together for the same thing, something we all feel a part of. And that is something to celebrate in itself. We all need to celebrate something and we all need to feel we belong to something or somewhere. Every last one of us. Men, women, kids.

Then there is Sunday. Laying in bed until late (in the company of a beautiful female is always a bonus...) recovering from Saturday's (and Sunday morning) bashings and festivities. Getting up (slowly), eating, lazing around, eating. Then just maybe going out and doing nothing in particular, just hanging out (and drinking beer). Or on rainy days, even a fully fledged sofa and DVD session in to the night (beer optional). Good times.

Sometimes I find it hard to believe I can laze on a beach most weekends for 4 months of the year when my weekends from September to May are so active and usually dedicated to the city and to my sport. But I need to get away from it too and not hold a hockey stick for a couple of months (Hmm, I don't think I can say the same about not holding a beer though). I do this so that when the new season comes around again I am salivating for action like I am now. I'd like to think it is a healthy balance. The beer may not be so.

So right now I don't want to spend my weekends on a beach in the soothing heat of the sunshine, surrounded by bikini-clad babes and wearing nothing on my feet but a pair of Havaianas flip-flops for days on end (Oh shit, what the hell I am saying...?) I want to be on a hockey pitch with a group of guys fighting it out and whooping and hitting balls (and the opponent) and releasing testosterone. At least the beer is always there in any case.
Email Post
Labels: Living People Sport