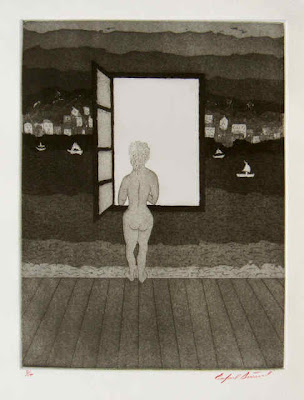 Sitting in an airport lounge looking out of the huge glass panels that make up one facade of the terminal building. Strangely tranquil and empty outside given where I was gazing, with little less to see on the sprawling concrete than the odd plane and a luggage pick-up cart trundling past on its way to its next load.
No matter how little there was to focus on through the glass outside or even just keep my wandering eyes busy, I wanted to sit at the table with my coffee and stare out the window as I waited for my flight.
You find things to look at. The long, bendy and sweeping arrangements of painted lines in different colours on the concrete to give order and to show the way. Planes standing like fixed statues instead of the jet-propelled flying graces they are designed to be. Even the cracks between the huge concrete slabs. Squinting to where the concrete ends and beyond. Because if we really want to and we look hard enough, we will always find something to look at to stimulate our minds. Just as long as we have the window to stare out of - give us that option at least.
Given that choice we will all look for the window seat. We would rather look at nothing out there than not look at all. The same as being by the sea or a lake. We may not want to go swimming or even just go for a paddle in it, but we would love to be near water or live by it and see it everyday. Water = life.
I remember the view from an ex-girlfriend's window in the lounge from her top floor apartment in Italy. Waiting for her to get ready on a night out I would gladly kill time by it. I would look out it even if I didn't have time to kill. Especially at night. Staring out on to the mismatched terracotta skyline of the old historic town rooftops I would even lose myself in the shapes and the shadows and the dim light from the moon.
After watching the Disney film Aristocats with my nephew, I felt like his favourite character -Thomas O'Malley the alley cat - in the scene where he brings Duchess to his Parisian neighbourhood, as he ventured out on to the midnight prowl. I would imagine what it would be like for a cat to roam like that. Sometimes I would lean out that window and guess what route a Parkour or freerunner would take as he scales, ducks, jumps and leaps his way around and up and down.
My imagination can run wild in the dark. My imagination ran across the airport concrete.
I usually take the window seat in a plane too. The view is great obviously, but it is more to do with having somewhere to prop my head against as I fall asleep with my trusty Ipod.
Email Post
Labels: Emotions Living Places Travelling