Sport and the simple things: Part 2 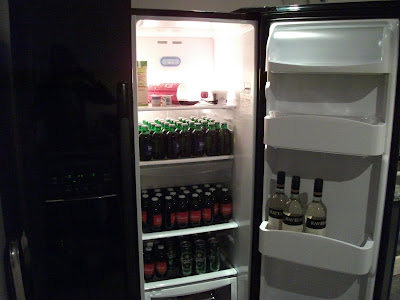 For the first time in years I find myself in England for my birthday. And what a birthday it was.
You might think that I was out in a club until 6 in the morning (like so many times I have) sipping champagne (which is the only one single thing that can give me a hangover). Well I wasn't. I was in a newly decorated, bare living room heated by two mobile radiators and a halogen heater drinking beer.
February is a month when myself and three of the guys I have grown up with and lived out each others pockets with, celebrate birthdays. In the past we have always celebrated together but since I've been in Italy and the other guys have moved to other cities, for many years it hasn't been so. It also happened to be at the time my mate was moving in to his new house and apparantly - in his words - I had no excuse to not help him decorate the place.
So there we were, two guys roller in hand covered in splatters of white emulsion, painting to the tunes that were banging out on from the ipod speakers for three days, in a a freezing house thanks to a broken boiler. I even worked extra hard to get the kitchen finished so that we could have everyone around on the saturday birthday celebration evening...and of course have the brand new fridge plugged in and put to immediate use with beer, beer and beer, oh and a few bottles of wine for the ladies present. In a four bedroom house with three bathrooms and a conservatory that is big enough and ready and usable as a mini indoor sports court, the party was limited to runs between the kitchen and the living room to avoid freezing in the corridor.
And it was a great party. There was nothing in there apart from 10 or so friends all sitting on camp chairs brought in in the eleventh hour or a few cushions on the floor. The trusty Ipod perched on speakers in the corner. There was still the faint smell of emulsion on the four surrounding walls. Yet we laughed every time someone had to go on a beer run, leaving the cosy living room. We bizarrely talked about car boot sales for about two hours solid, with one of my best mates almost driving us to tears as he almost did a stand up session about his and his wife's first adventure at one. We drank and drank some more, we laughed and joked and tapped our toes to the tunes all night long.
We could have been in a club, downing shots and cocktails and hitting the dance floor until the early hours but instead we were in a bare room until about 4am. It was such a simple night and such a laugh. Ok, the alcohol was there and the music too. But it was just another confirmation that you could literally put me in four walls with all my best friends and we would make it in to what ever we want. We would enjoy ourselves just as much. The simple things in life.
The sporting element of this post? Well, from all the painting we did, we managed to make a pretty good ball out of all the masking tape accumulated (from covering the skirting boards, edges, etc) and of course the boys just had to have a game of drunken football in the adequately cleared indoor football arena, er I mean conservatory.
Email Post
Labels: Chortles Living Music People Places Smells Sport Things