The biggest street party ever 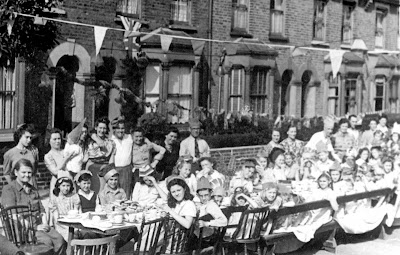 On the 9th July 2006, as soon as Italy's Fabio Grosso kicked the winning penalty in the World Cup Finals in Berlin, the whole of Italy exploded. I mean literally, exploded.
Within minutes waves of people poured out of the towns' bars and out of houses in to the streets and an array of flares had sparked up signalling the start of a euphoric, ecstatic chaos that took over. I was in the biggest street party I'd ever seen. About 60 million people. Italia: Campioni del Mondo.
I remember my brother calling me not long after the final had finished as I wandered out on the streets with my friends into a smoke screen had blanketed the town from the flares and i couldn't see a thing. I just couldn't describe it to him apart from something like 'It's just gone nuts here'. Everywhere you looked, people were running through the streets draped in Italian tricolore flags, jumping up and down, unable to contain their joy. Climbing up lamp posts, jumping in and out of cars. Dancing in bars, in the streets, on the backs of trailers pulled by tractors. Oh boy the traffic...cars left in the middle of the street, horns blaring non-stop. A complete standstill, a whole country stopped by a patchwork round thing kicked by twenty-two men. I went to bed at four in the morning and it was still going strong. Maybe if I was Italian I wouldn't have gone to bed.
Now as summer finally settles in to season and in Italy the weekends of sport (and hockey for me) usually give way to weekends on the beach. But this year, like every four years, the big screen is put up in the lounging area by the sand. Football reigns once more.
For me it's almost like waking up on Christmas morning as a kid. You just can't believe it'a finally here again. Instead of a guy dressed in red with a big white beard, the world now waits for the ultimate sporting victory. A whole month and not just one day. And before all those groaners question how anyone can get excited out of chasing a ball, it's not just about football. It's a festival. So many moments crammed in to a month.
Skills, goals, saves, crunching tackles, bookings and sendings off, passion by the bucket load, emotions, fever pitch, celebrations, goals and more goals.
Fans; rainbows of colours, cultures, dancing, singing, chanting. Emotions, euphoria, dissappointment, tension and more tension. Belief. Beer. Bunking off work.
Commentators, their gaffs and their analysis, theme tunes, Pavarotti singing, Pele jumping in to the arms of Jairzinho, Johan Cruyff and his turn. La mano de Dios, the hand of God. Bobby Moore's tackle against Brazil, Gordon Bank's save against Brazil.
Smiles. Tears.
Mexico '86 gave us the Mexican Wave, now in South Africa we have the vuvuzelas. And their is always sun, sun and more sun, it is summer, the best time of year. This time around in South Africa it is the beginning of their winter, but the hard blue skies and constant sunshine lead you to believe otherwise. My mum doesn't like football at all, but she doesn't miss an England World Cup match and she even knows who Rooney, Gerrard and Lampard are. She is like one of the many swept up in the fever the World Cup brings.
This time I am in England for the World Cup for the first time in 16 years. I can feel the build up just like at Xmas and see all those St.George flags. I can feel first hand the expectation England has. I can feel the 44 years of hurt, something I don't like to say. I prefer 44 years of hope. Hoping that I will be stood with my friends on 11th July in the biggest street party ever. Four years ago I really did party, as an Englishman in Italy; it just couldn't be at 100%. I hope this time it will be at 110%. And believe me from experience, if that happens get ready for it, it WILL BE the biggest street party ever.
I could write for hours just like I can chat for hours about football (hey, I am but simply a man), but Serbia v Ghana is just about to start. "Who gives a bean about that game??" I hear you ask. To which I will simply reply: "It's the World Cup."
Email Post
Labels: Emotions Living People Social networking Sport