Do you know who Bobby Moore is? 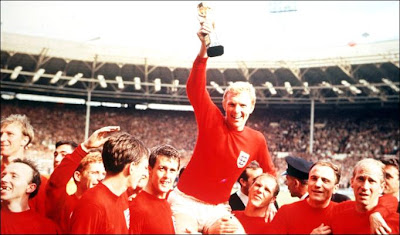 There are times in airports (usually when I'm bored/waiting too long for a flight/flight is delayed/can't play eye-spy/got drunk and missed flight and hoping for a spare seat cancellation) when I can tell which nations people are from without hearing them speak. Obviously from living in Italy I have an uncanny knack of spotting out Italians most of the time. But I'm also pretty good at picking out the Danish, Swedish, Germans and Russians amongst others.
As an Englishman I get the usual umbrella jokes when I don't actually have one...well not any more; until a year or so ago a few clients gave me the chance to build up a little collection, I had them to give away. Well actually I did absentmindedly give them away, to a few hotel foyers, clients offices and even to a train. If anyone wants to give me a bowler hat as a gift I will most welcomely wear it - even though I love milk and drink a litre or so a day, just don't ask for the jock strap and the whole Clockwork Orange thing, not while I'm sober anyway.
Though in conversations with Italians once the jokes are aside they like to say just how 'cold' we English are. At this point is where the British bulldog comes out to bark and I staunchly defend my nation, where I like to point out that our 'coldness' is infact sometimes mistaken for 'conservatism' and that we tend to mind our own business. To be fair they are then interested to hear our side of the story and ask more questions about what an Englishman is. Just like I am interested to hear that Danish and Swedish are not all beer swilling Vikings and instead are quite relaxed, friendly, speak amazing English (and are happy to do so in their own country) and have a natural eye for style and design. Just like not all Dutch people are wacked out on marijuana.
Sometimes, I find myself in these conversations with Italians to often and just go on to auto pilot and churn out the same replies (seeing as the questions are the same). It's not that I'm rude or want to be impolite, it's just that it gets tiring sometimes saying the same things. I don't like monotony, the same way as I don't like Fish and Chips and gardening (omg, just what kind of Englishman am I?). Now in this period of the football World Cup Finals in South Africa, the world is alight and in close-up attention on TV, with cultures and colours galore. Fans are at packed stadiums dressed up and playfully proud to be in their stereotypes, it is a bit of fun.
Being in England during this World Cup - the first time in 16 years I have witnessed a major international football tournament in my home nation - I get excited seeing all the St.George flags hanging from cars and house windows. I get swept up in this fever. So now when people ask me what an Englishman is like I could talk about our characteristics. But I like to provoke a little thought. So I will simply say to my Italian friends, "Do you know who Bobby Moore is?" Nothing more.
Note I say is and not was. despite being taken too early from us by cancer, Bobby Moore is a legend and he lives on in England, even for those who don't like or know about football.
Email Post
Labels: Character Culture Living People Places Social networking Travelling