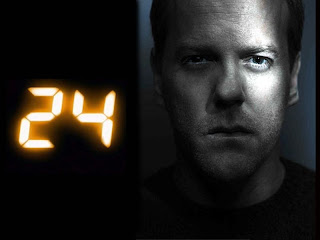 I remember in my younger years watching films and really getting in to them so much so, that I often felt emotionally affected by them quite easily. Well that's the aim of every director I suppose, to involve the viewer. But more vividly I remember my dad saying with a grin “It's only a film” every time I got too influenced, especially when anything sad happened to a character (like usually dying) that I bonded with (and why do we all feel soooo sad when a dog dies but we can be indifferent when hundreds of poeple die in a war film for example?). It makes me laugh now when I think back to him saying that. Back then I used to think about it and give my dad reason, it made me feel better at least. I mean, it's fiction I was watching, it's just entertainment made for TV.

Now as I sit late in to the night on another marathon session of watching another series of 24 on DVD (after watching the latest episode in the current and last series on Sky TV), my dad's words poignantly come to the surface again. You see, I only planned on watching an episode or two, but as the digital clock comes up at the each of episode I am left hanging (as you are supposed to) and I just can't go to bed until I see the next episode as it hovers and flashes at you on the DVD menu page: "Go on Andrew, you know you won't sleep left on this hanger". Last night I watched six episodes. And I could have watched more. I was too drawn in and enraptured, I was too involved.

If my dad had been on the sofa with me he would have spoken those calming words “It's only a film”. Maybe I needed them, because I could literally feel Jack Bauer's day, the stress and the strain, the intense situation. Yet this time round it is exactly this that helps me, and not my dad's words. As I watch I think (like everybody else does) about if Jack Bauer ever goes to the toilet, and I also think about how he and all the other characters, such as the President of the United States and the director of CTU, deal with it all; how they make the decisions they have too. How do they stay sane? How do they deal with everything thrown at them? How do they get through it?

Watching 24 helps me realise that whatever difficult or trying thing is happening to me, there is always someone who is having it rougher. Now you might be reading this thinking, 'for God's sake Andrew it's not real, it's just a TV show, it's entertainment', just like my Dad might say again, and I agree and I am well aware if this. But at the same time I tell you it helps to keep me focused, it inspires me. It shows me to just get on with it, just like Jack does. Some people turn to drink or drugs to get them through it all; well, I have to say my choice of watching a fictional TV show is healthier. So I don't go looking for the answers at the bottom of a bottle or try to escape through a chemical fix, I'll turn to Jack Bauer instead thanks, he gets things done.
Email Post
Labels: Character Living People Thoughts