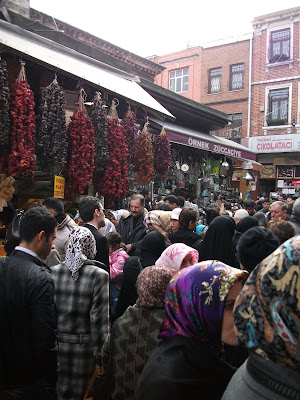 I could feel it as soon as I walked out of the Ataturk terminal Arrivals hall and to the taxi rank. A constant stream of canary orange cars coming and going, the taxi coordinator in flapping rain mack with his walkie-talkie, arms flaying and even yelling at the drivers that hadn't moved far enough up the rank to get back in their cars and do so while doors and car boots were still precariously open.
Walking through the back streets of Istanbul Old City; all those bazaars with their smells and sounds, and the energy from the people as you squeeze past each other. The market sellers as they raise their voices above the mass to hustle and sell their wares. There I could really feel it. The feeling flows as you flag down a cab and make your way across the city to Taksim and the modern shopping area; a long wide street full of high street shops and a wall of people moving up and down it's pedestrian artery, whether it's day or night, it never ceases to pulse.
Step off this street in to a parallel one, it pulls in it's waist like a skinny waif model. A narrow side street, long and tight but full to the brim. Outside feels like inside as you dodge and dawdle between the people and the cafe bar tables, the February cold fades as the night population bulges in the street.
And to think I wanted a break from it all and get away, relax and see a good friend. Instead I could feel it. The bustle. It is this bustle that I really needed, not to veg out; to give me a lift, to give me my energy back as if I had stepped in to a giant battery charger.
And then there was the wail. The call over the mosques' tannoys inviting the people to come and pray. It carries like a Poison Ivy scent through the streets, charming to the sound. It is enchanting and relaxing at the same time, even when it wakes you in the morning. Knowing that I could fall back asleep after feeling it slowly drift in to my ear canals was kinda soothing. Even if I had to get up, an alarm clock couldn't coax me out of my bed like that wail does.
And then there are the people from the place who add the cherry to the cake. It is those people that make my visit complete, that take me in as one of theirs and let me see through their eyes. I love this when I visit a city. I like to live it, not just visit it.
I felt all of this in those four days there. I went their for my birthday as I live through another year. And I really lived there for those four days.
Email Post
Labels: Culture Emotions Living People Places Seasons Smells Sounds Travelling