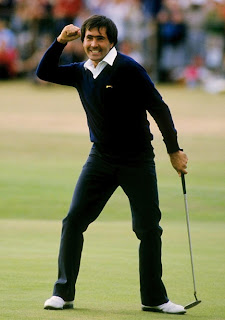 Another one of the greats who graced this earth has left. Only a month ago I wrote here how some people deserve to live forever (www.andrewgranville.blogspot.com/2011/04/live-forever.html ), and now Severiano Ballesteros, a man who gave so much to golf, who almost reinvented it, has been taken from us at just 54 years old. Too early, just like someone else so close to me. Strangely, in a way I am content being in Spain when it happened. He was always loved by us Brits too. But today as a country mourns, you feel closer and surrounded by his greatness in these days.
I am an avid sportsman, there are so many disciplines that I admire, but golf was never really one I could get in to. My golfing career consisted largely 'nicking golf balls from the fairways of the local course in my school days, which developed in to stealing on to the number 9 hole that went down to the river as it was getting dark, and then of knocking a ball around the back field of my best friend's house with him and a 7-iron. The tree in the corner or the big metal door on the changing block were our 'holes'. We just made it up as we went along. But that is how Ballesteros started too, knocking a ball or even pebbles down the beach in his home town of Santander on the north-coast of Spain - not exactly Costa del Golfing country.
Yet this is what makes you do sport. The improvision of it all. How as a kid you would dribble around the pet tortoise and the garden trees and the slide your dad put up for you, before unleashing a window-breaking shot that would not make the crowd scream, but instead your mum, on your journey to being the most amazing footballer to ever grace the planet.
Severiano Ballesteros had passion for his sport. He was an innovator of it, an inspiration, a genius. He was exciting to watch as he invented shots from behind trees while on his knees. He had flair, he had grace. He was swashbuckling Seve.
Or just simply Seve. Because this is how you know you have become great; when anyone who knows anything or anyone in sport knows who you are from just a shortened version of your first name. Seve.
He became a role model for the golfers to come. But even though I never played golf, or was really interested in playing it - especially once I got another stick in my hands and found out that hockey was my kind of clubbing around - I remember as a kid seeing him on the greens and the fairways, complete with his smile and his guile. He just made you want to grow up to be a sportsman in one way or another. He is a legend and a role model. The image of him sinking that final put on the 18th green at St. Andrews to win the Open in 1984, is world reknown. Him pumping his fist with a huge grin is the image he will be remembered forever more. That image was a sign of what he was to become: iconic.