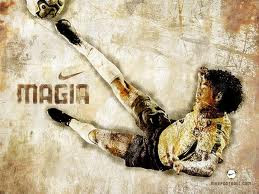 I was in an airport again last week, again on my own and again for work. But despite clocking up more miles travelling on my own than in company, I can never get bored in airports, infact they are a melting pot of inspiration, where people from so many different places can be gathered under one roof. I have realised how I often end up people watching, usually sat on a bench eating the usual airport sandwich; trying to work out where they are from or even where they are going, what they do and who they are watching, just like me.


This time I was standing in the check-in queue when to my left a small ball went rolling past the corner of my eye, followed by the short running steps of a boy of about six years-old. Back he came again in the same energetic manner after catching up the ball and kicking it back to where he came from - at the front of the queue where his parents were about to check-in their luggage.


He continued to play around the queue in his own private football game, not stopping for a second, and for a moment, as I was stood their patiently and uncomfortably still, and being the sportsman I am, I wanted to join in.


Or was it not being the sportsman but the boy that I am? Because boys and balls go together. Er, and before you start sniggering I'm talking about balls as in football, tennis, basketball etc. Well actually, maybe that's the reason for boys obsession with balls - we are born with them. Give a boy a ball and it is his world. He will play anywhere and anytime. The world is his pitch or his court; the world becomes a playground. When I was a kid I did the same as this very kid in my back garden. Not one summer day I failed to do so. Last summer I was at one of my best mates' house and I did the same with my godson. When I was a teenager we played in the living room of friends' houses. When the parents left, the match started.


I got bored of standing still in that queue. I wanted to drop my luggage and go and play ball with that six year-old. Maybe that's why guys never really grow up; boys will be boys and when we see a ball we roll back the years and we are six years-old again. If you watch Lionel Messi play for Barcelona he plays like a born professional, but he is just really a six-year old boy in the playground, all the money and stardom are left behind at his feet. Cesc Fabregas left Arsenal this season to go back to Barcelona where he grew up, to what is really just playing with his mates.


Give me a hockey ball and a hockey stick and I will never be able to resist having a dribble for the rest of my life. I can imagine myself in my old age still doing an indian dribble even if I may be sat down and to weary and old to force my legs in to play, the wrists must be able to manouvre. I really can't imagine not. The airport floor would have been similar to playing Indoor Hockey in our winter season.


The kid kicked the ball and it bounced off one of the columns of the airport terminal structure. It must have been a goal he scored, in off the post.


Even in the office, how many times do we scrumple up pieces of paper and play basketball in the bin? I don't know a man that hasn't. The man that really is just a boy.


The six year-old then slid across the shiny marble airport floor to catch a slow, trundling and rebounding ball. It must have been a sliding tackle.


I have always had a squash ball that I squeeze in my hands to train my wrists. I also lay on the sofa and throw it back and forth at the wall. I am really Captain Virgil 'The Cooler King' Hilts in The Great Escape, aka Steve Mcqueen. That ball (and glove) would save my sanity, that I am sure of.


I wanted to shout 'pass...pass it' to the six year-old boy.


I think this is where there is a connection with my love of dogs. Dogs will always chase balls, they will never grew old of it, male and female dogs alike.


In that check-in queue the Nike Tv advert with the Brazilian 'Seleçao' National team sprung to mind. The Joga Bonito - the beautiful game - flowed through an airport terminal at the magical, samba-style happy feet, where grown men earning fame and fortune were due to play in the World Cup Finals. They may as well have been in the garden, or the playground, or anywhere a ball can roll, be kicked, flicked or kept up.


Just do it. Nike have said this for years. And that's all we boys will ever do. Give us a ball and we will do it. We will play forever with a ball. It's a dog's life really. And whoever invented that phrase as a metaphor of hard life should have thought again.


Adidas say impossible is nothing. Adidas is all in. Well, give me a ball and it is impossible that I will not play. Andrew is all in.


The parents finished checking-in and walked off with their boarding passes calling "Venga, vamos" at their playful Spanish son to pick up the ball and hurry along. I was left waiting my turn, looking to my left at the kid's playground. I could make out a goal with the column and the next one along, even if it was a big one. One of the benches could have been a goal, with another bench further along and opposite being the goal at the other end of the pitch. My imagination reconstructed the moves like Messi, not Jagger. I imagined kicking a ball like a free kick from where I was stood to the terminal entrance which actually was a goal to me. I wondered if I could flick or scoop a hockey ball the length of the check in area with my hockey stick without it bouncing.


To the ball I am devoted.