Mine and his fifteen 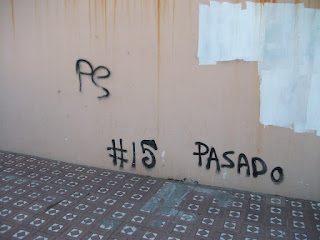 I was born on the 15th February. My squad number in my hockey team is 15; in any team I play I ask for this number. 15 is my lucky number (if not 15, I ask for 13 - (un)lucky for some and thinking of Friday the 13th tomorrow...). But today is 15 years since he passed away. It still seems so many years less than that. If you swap the 1 and the 5 around in the number 15, you get 51 - the age he was. Too young.
In these past few days I can't help thinking of what these last fifteen years would have been like had he been here. He would be officially at retirement age now. I wonder how he would have changed, I wonder what it would be like to tease him, joke around and call him an OAP (old-aged pensioner) who can get a free bus pass like I do with my mum :-)
I wonder how grey his thick head of hair and beard would have turned from the jet-black I remember it being for so many years. Would he still have the beard? Would he have been tempted to shave it off after so many years with it? I'd like to think he would still have it, it was a part of who he was, I grew up with that beard.
But really, would things have changed any more? It would be the same ol' him of course. Maybe there would be more of his oil paintings adorning the walls as he perfected his technique. His fishing hours would have been clocked up.
Would things that inevitably change in time change how I would see him? How vividly I still see him. Would it change what he did in any way to me? Probably not, but still I want to know more about how he worked and how he did things day by day now that I am older and more maturer (I think...) to better understand. I never did get to learn quite enough from him. Even though certain values I have are his doing. I would have liked to learn more things over a pint with him. In return I would show him the boats in the marina where I used to live in Italy, and show him some more in the marina near where I live now, let him stroll up and down the quays for hours, any time he wanted. He loved boats.
Across the road from where I live is a wall that has been graffitied - the one in this photo above. Most days I walk past it and from the first day I moved in to this appartment I noticed the #15. The word pasado I saw as just another word sprayed near it. It was only recently that I see them now closer together: 15 pasado. Pasado in Spanish means past. And Fifteen years have past.
Email Post
Labels: Character Living People Thoughts Tributes