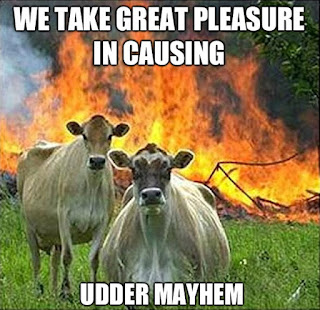 In case you hadn't noticed, nine times out of ten I write in here on a Sunday. I actually had the intention to do that from the start. Sunday is a day when all planning and any order go literally out my head, out the window and takes a long walk in to the sunset and lives happily ever after. Well, until Monday morning at least. Leave me fantasise for a moment. Besides, apparently God created the world in six days and rested on the seventh, so who is my tiny mind to argue with him? All hail the big beard.

Because that's it really, that is to say to my mind. All the week there is some kind of organisation theory up there but on Sunday it strips off and just runs around stark-bollock naked, and it's anyone's guess what can end up in there. And to be honest that is when my mind is at its most honest, when it slips out the straight jacket. And I just let it get on with it, let it throw its many colours at the wall to mix and splurge and see what it comes out with. Because that's when I feel I can write...or at least feel free to make a mess. So hence why I always had the intention to write here on Sundays.

This weekend started with a dream. Of chocky milk. Yep, milk of the chocolate kind. It sounds weird to call it chocolate milk; 'chocky milk' just runs off the tongue better. It's like why you would say Refrigerator when you can say 'fridge', which is the same in Italian by the way and when I was learning Italian I couldn't even pronounce frigorifero, so thank god there was the frigor equivalent. But let's try and stick to the point for you the reader's sake, especially when you're probably already thinking 'Did I hear right? He dreamed of Chocolate flavoured milk?'

Well actually I don't think you thought that, I bet you said 'chocky milk' really, didn't you? Ok, ok, stop it...

My mind is to blame, as always. I think the reason why I dreamed of  chocky milk was because on Friday night I spoke to one of my best friends, Tom. We grew up together, so he knows me well, above all on a Sunday morning after a good night out, usually involving copulous amounts of alcohol and me sleeping on his couch. The thing is he wakes really early and comes in and plays on the playstation while I stir and mumble and pretend to be awake. Actually thinking of it I don't even try any more because his early mornings have got earlier. Like, middle of the night for me, on a Sunday at least. But to his credit, he always goes to the shop and gets the morning papers, and to get me the hangover cure breakfast - a flapjack and a bottle of chocky milk. He doesn't even have to ask me any more. I'm going to the big smoke to see him next month and that is what Sunday morning will be like. God, I'm chortling to myself now about it.

So I think my mind subconsciously associated the two of them. It was so vivid that I even woke with the taste of it in my mouth. I love milk, semi-skimmed, I drink so much of it everyday, especially at breakfast time. There were a couple of times my dad joked with me for his own entertainment reasoned with me how he should buy me a cow to keep in the back garden with all the milk I drink, which believe me, to a naive and imaginative under-ten year-old, is a feasible thing to do. But Sunday is chocky milk day. It was on my mind on Saturday, I was almost  obsessed with the thought. So today I had to go out and buy some, I went on a mission to the shop, which unfortunately isn't just on the corner. I have just sat this evening on my sofa and drank it all, I earned it with that walk.

Well, actually maybe it was that Sunday is a day without order, where my mind wanders and I can laugh and write about it. Like it has just wandered all over this page, stamping out its territory and taking a pee in the corner. Sunday is now called Chockymilkday in my house. You can buy it out of any fridge on any Motorway Services Stop in my mind.