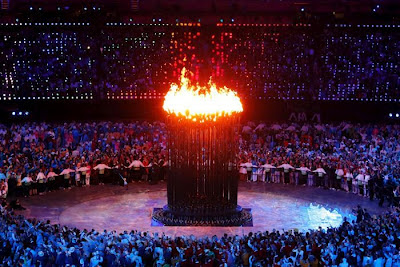 Right, I would just like to give a big-bird-middle-finger salute, loud and proud, to all the dissers out there of the Olympic Games opening ceremony in The Olympic Stadium, London. Nearly all of them being British and the reason being for money. Yeah, that can't-live-with, can't-live-without element of our lives that makes the world go round.

So we are coming out of a world recession, so we need to channel money in the right areas right here and right now. The Olympic opening ceremony cost £27 million (if I'm not wrong) and does not stand in line with the last sentence I wrote. People thought it was generally a waste of time, effort and tax payers money. But I damn well loved it. Infact, as a Brit, I can't remember being so damn hyped for the Olympic Games as much as I am for this one. I couldn't give a s#@t how much it cost (especially as it being only a quarter of what Beijing spent in 2008), it was money well spent. It put the nation on a pedestal and brought people from around the world together. It was a cultural, artistic moment that set the games alight, of which the final moment of Sir Steve Redgrave running in with the torch and then the rising, flaming spires coming together to form the original and designtastic Olympic cauldron represented what the Games is about. It is a coming together, a celebration and a down-right jubilant moment. Let's get this party started.

I recently watched a documentary on the 'making' of London 2012, from the start of the derelict dump of Stratford to completion of the Olympic village and park. So if you want to talk money, it told us that it is the world's first sustainable Olympics, that pieces would be taken down and sold on to Brazil for Rio de Janeiro 2016, that 70% of demolished materials were used again and 85% of the contaminated land it all stood on was decontaminated - so much so, that a baby could dip it's fingers in the soil and then lick them clean. And all for £800 million under budget. Are you gonna have a moan now at the opening ceremony being a waste of money? And what about speculate to accumulate?

Do you know, why the hell am I taking about money here now?? I work in sales and as important as money is to me, it is not everything. I consider myself to be in a healthy position being like that. This is all about the sport, all about the great stage in my own country (and I really wish I was back there in the middle of it). It is something that only comes around once every four years like the football World Cup and so many other tournaments, and it brings so much joie de vivre. As a sportsman I have been on a constant buzz. I have watched nothing else on the TV, flicking between just two channels for the last 10 days. Last night I witnessed a pinnacle of sporting phenomenalism in Usain Bolt. Despite being in the off-season and loving the summer rest, I have been dribbling my hockey ball with my stick around my apartment; watching hockey everyday at these games is driving my will to pre-season training.

It's not only the Olympics; in June we had the football Euro Championship, another month of joie de vivre for me. The Olympics only last two-and-a-half weeks, but by God let's party through them. Ce-le-bra-tion time c'mon. Because that is what a tournament is. They come and go, and they can engross us and spark our emotions in so many ways. Joy, elation, determination, anger, pain, relief, dejection, disbelief, shock, happiness, satisfaction, respect. That Olympic cauldron could well be a meltin' pot of every kind of burning emotion there is in the stadium. It brings all the ingredients of life together in the same recipe. Just add people and mix. I smile watching every event.

Every hockey tournament I have played in is the same. I set out my stall and dive headlong at them. Whether it is a serious one with sporting prowess at stake, or a summer social, fun one flowing in beer. I don't just play them, I live them. I remember in 2005 playing in the European Cup Winner's Cup in Lille, France. I played, lived and breathed hockey for 6 whole days with a band of brothers. I got home aching and tired, my legs running on empty, the callouses at the base of my fingers from years of holding a stick harder then ever, but so damn happy. My body needed a complete rest but my mind never rests; it hit dribbled, passed and celebrated many more hockey balls over the following days. It is doing it right now. And we didn't even come anywhere near winning. I witnessed Club Campo de Madrid lift the cup and sing and dance their way out the stadium and I applauded them. I played against Olympic gold medalists, I made new friends. I even got all the French kids involved in cheering for us. They are the future, we need to make these occasions great for them because how they grow will be how they will run the world in years to come...even though that goes further than sport.  Instead of emulating Jordan, The only way is Essex, Geordie shore and Big Brother contestants, we need our kids to look at Brits like Jessica Ennis, Sir Chris Hoye, Mo Farah and so many more. And as the world comes together in these moments, how can anyone not look up to Usain Bolt?

I think everyone needs a tournament in their lives, everyone needs that buzz and to feel alive, whether you like sport or not. I think everyone can at least appreciate it. The whole recipe is there in the Olympic cauldron; go on, take a spoon, stir, dip it in and try it. It has set the country and myself alight. So once again, just in case you didn't get it the first time, a big middle finger in ya face to the killjoys. Olympic or not, you need to see the flame burning bright in your day.
Email Post
Labels: Attitudes Culture Emotions Living People Places Sport