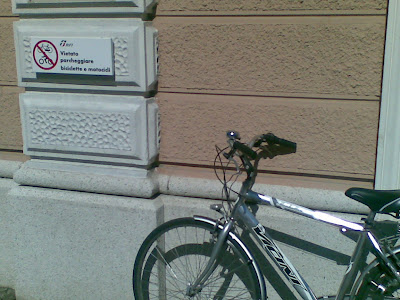 Going home or going on holiday? That is the question Wills me' old mucker. It was for me last week anyway as, after 3 years away, I finally went back to Italy after so many years of living there. In all the time I lived there, every time I got a holiday I had to decide between going 'home' back to England to see family and life-long friends, or really going on holiday, somewhere to discover and be a tourist. Now I'm in Spain, the dilemma has doubled.

As soon as I was in my mate's car from the airport and on the boulevards of Bologna that surround the old city like a moat, seeing every 'Porta' or old entrance to what was behind the ancient walls, I felt at ease. Like I had never been away. I spent the next couple days organising stuff I still had there. My books, I could not resist flicking through them like I was in a book shop. So much time I could pass by like that. My books are like roots of me; ones that I have laid here and I needed to take some to take back with me, to replant them and grow with me wherever I am. Like my Calvin and Hobbes books - ones to bring me life, laughs, imagination and colour even in their black and white comic strips so carefully put together by Bill Watterson, one man I would love to sit and have a pint with.

I even did some pre-season training with my hockey team. Hard work, especially as I got out of bed with legs of an 80-year old after the first real battering and ball-busting session for over a year. Why do I do it? I asked myself. I'm on holiday for God's sake. Or was I? The real reason is because of the people, the buzz, the being with my band of brothers, and of course that fixation boys have of chasing a ball ( http://www.andrewgranville.blogspot.com.es/2011/12/boys-balls-and-joga-bonito.html ). The beer flowed after. The breakfast day after sitting with a expertly prepared cappucino (oh yes, I miss them..) and reading the Gazzetta dello Sport.

Or was it the place? The winding small streets opening up in to impressive piazzas that I love so much, especially at night. Happy to see that I know them so well, but still happy to find new streets and lose myself within the centre. As if like air, I need to go to the very centre, to stand in the Piazza Maggiore and look all the way down the artery of Via Ugo Bassi to the symbolic two towers, the Torre Asinelli. The black and white photos of heroic partisans on the wall of the old library, the fountain. All these things give me a familiar sense of tranquility I can even feel in my long, slow breaths as I stand and take it all in. Hold it for a moment to hold the current memory. I don't want to ever take these things for granted. So many good memories, and maybe so many more still to live. The people are still there as ever, but developing and moving on as ever, new life emerging, just like the place too, but with changes that I saw were for the best - the improved central station and it's new digital clock next to the old round clock stopped at 10:25 in honour of the 1980 bombing. New digital mixed with the old wherever I looked fitting in so nicely.

Then as I got on the train to go down to Cervia by the sea where I lived for more years, stopping at the Castel San Pietro Terme station and seeing my old workplace behind it, the restructured mill, many thoughts filled my head. Hmm, some holiday I was having, thinking of work and everything that went with it there. I have always said it's not just the end destination, but the journey that is as important.

Then I entered a timewarp. Cervia. The same people, the same places. Some pleasant changes like new bars on the canal next to the old-brick salt warehouses and tower, fitting in so nicely. A few welcoming faces that still had the same smile. Then other things that I just don't miss - I keep on moving.

Bologna --> Cervia --> Bologna. A journey within a journey, the destinations to smile for, the ride just as much so, no rush.

Then a melancholy creeps in  as I realise I haven't got certain things any more that I had here. Even simple things like a bus ride from Piazza Malpighi to the Central Station. Let's go round again, maybe we'll turn back the hands of time. The hollownesss of leaving again, but with a smile, Always with a smile. Every day was different. I rediscovered things. I have already quoted Marcel Prost before along the Motorways of my Mind: "The real art of discovery is not to visit new lands, but to see existing ones with different eyes". (http://www.andrewgranville.blogspot.com.es/2011/11/art-of-discovery.html) My eyes have seen many things over the last few years, they are different than before.

So was it the place, the people or just peace of mind that I got? Whatever, I just go with the flow, why change a habit of a lifetime? I am cruising down my motorway. Besides, they all begin with 'P' anyway. If I want to put the whole 'holiday'  in a nutshell, I could just quite simple say it was business as usual.
Email Post
Labels: Emotions Living People Places Thoughts Travelling