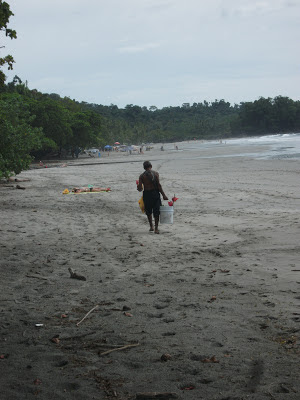 So most days the conversation usually went something like this:

From the rainforests of the Arenal Volcano to the barefoot beach pueblo of Montezuma, this reply just rolls off the tongue of every Tico in Costa Rica. Even the people who import themselves there for long enough do too - after just 3 weeks in Montezuma an Italian guy who worked in the smoothie bar across the road from my cabin was saying the same each time I went for my Vitamin C chill out. Pura Vida was the exact reason he would be staying there and serving up many more blended fruit cocktails for many weeks to come. The whole place is an oasis of calm, I can't really explain it more than that, it's better to live it in order to get to grips with it. Still, I think you catch my drift.

Everywhere I went to was tantalising, it was everything I had imagined and hoped for, but I left with a heave in my mind and my gut, knowing there was still so much to be see, there just wasn't enough time. Yet there is one thing that has left a trace in me and where I have been; the people that I have met, both Ticos and travellers.

The nourishing calm of the Ticos is a friendly side that will surely lure me back to Costa Rica, but it was their pride that warmed me as much as the tropical climate. Proud of what they have in their own backyard, you get the feeling many of them would do what they could for you, even if you weren't leaving them any money. The brother-sister ownership of the 'Sloth Backpackers hostel' in Santa Elena-Monteverde proving so before my very eyes when 2 passing backpackers who saw the open door and chanced asking for some info. They walked away armed with more than they bargained for. As I sat there drinking coffee like in my own kitchen, it felt homely and belonging, especially on the first night there as howling wind descended on the travelling town forcing myself in to the bodily refuge of a hoody and a blanket on the bed. These guys understand the people who travel thousands of miles to be in this town and they are honest towards them. A few weeks a go after I landed I talked about seeing a friendly face upon coming here (http://andrewgranville.blogspot.com.es/2012/11/tuned-in-to-discovery-channel.html) and how you need to step out from the comfort zone; well I found some new friendly faces here, even without any added rolled-up leafy aid...

I went out to eat with the brother Diego in his mother's soda, a little off-the-main-beat café on a dirt road. Of course he recommended it, he's a smart guy when it comes to looking after business, but it is a pleasure spending money on good, simple food with someone who takes the time right from the start to remember your name amongst the passing hundreds that come his way, and not just call you amigo. For me it is just a return of hospitality and they are grateful for your custom and apologise for the bad weather, despite you knowing fine well you have hit the  back end of the rainy season.

Even the guide who finds you a tree-frog in the dead of night - the most beautiful thing he knows as he puts it himself mad my whole trip worth while in the middle of a rainforest under the beam of a flashlight. He acknowledges how wet and tired you may be after a long trek in the pouring rain and thanks you so sincerely for giving him the chance to show you the beauty of his country, of which he is so proud, it is humbling.

Then there are the other travellers you meet along the way. Travelling on your own doesn't mean travelling alone. The hostels are a melting pot of story and knowledge sharing over a supermarket six-pack of the local Imperial brew. Nations come together like paperclips to a magnet which interlink and create chains and paths to travel in the future. At one point I found myself part of a group of 5 backpackers, each of us travelling alone who had found each other along the way.

It is never just about the destination but the journey along the way; one day I got off the bus with two fellow backpackers forming a mini-group to get a smooth ferry ride across to the lush green peninsular of Nicoya, followed by another 2 hours standing up in the aisle of a bus going down a rickety 30km road to Montezuma, gripping on to the overhead baggage rack where all that was missing were a few chicken cages. It was as we all held on in the aisle that one of my new found company said with a big grin on his face that things like this were some of the most memorable experiences, not just the blissful place we ended up in, I knew I had found the right company, something that I could tune in to, someone who loved the ride, someone who enriched me.

But even people who I talked with at a bus stop or a breakfast table or met for just a couple of hours enrich you. It is then you realise that it is not just the place but the people who make the place too.

I'm not just talking about this journey or the beautiful places I have seen, but everywhere we are or we go. For a moment ignore everything I wrote about Costa Rica, instead think about it; everywhere you are, think of where you are right now, of the people around you. Think about the times you had the best night out in the shittiest place because you were with the right people, people that are near and dear, the people who bring something positive to your life. Think of the coolest, busiest place you have been in the middle of yet felt on the outside. People can be the make or break of wherever you go or wherever you live.