Dirt roads of my mind: rizlas, condoms and coca-cola 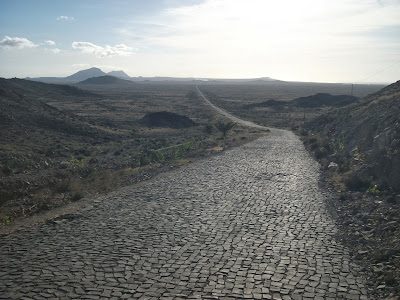 It's that time of year when a journey comes in to my journey. Yes, I mean a ruck sack, plane ticket and destination to discover, kind of journey. I have just come back from Boa Vista and the Cape Verde islands. So Penny For Your thoughts Productions is proud to present to you once again. To present you the things that this journey gave me, because they were so many things. People, places and more than anything, experiences.

Because this is why I do these journeys, for experiences. Yes, there were beautiful long sandy beaches and a 16km hike along them, stopping at intervals to gaze on to the ocean and the crystal clear water, with waves churning out of it to encapsulate me for hours. That is a journey in itself. And there was another hike across barren, raw, rocky terrain up to a dry water hole, and then freeclimbing up more rocks to a peak. There was the view to the other side of the island, to the two small villages we had passed through on a quad bike, and the barrenness stretched out before us waiting for our return, only big desert grasshoppers going faster than ourselves.

There were sand dunes in a desert to quad bike up and then run and roll down, to runaway and drift like the ripples from the windswept grains. There were no motorways on this journey to drive down; just a cobbled highway that split the dusty wilderness in two. All roads lead to Rome they say, or to Sal Rei, the village capital of the island in this case. The rest were dirt roads. These were the roads I journeyed down the days I was there. And my mind went with them, I took it all the way down and they let it be one with them.

I didn't just need roads to journey. Sitting in a hammock with a book and the sunset; dwelling is travelling without moving. I made friends on my journey, but not only the two arms and two-legged kind, but also Strela, a cold one in a bottle kind, all day, and fish every day, even twice a day. And when the evening came and the stars hung like diamonds in the dusk, every bar's own brew island Punch could take hold of you and make you laugh, but could play tricks on you and give you a bad head. But it was all part of the experience. And to get home or anywhere for that matter, every guy had a 4x4 and every guy was a taxi driver. And out of common courtesy everyone beeped everyone else when they passed each other. The tradition becomes an epidemic and travellers and tourists got in on the act and waved to each other.

And when you thought you have had enough experiences in a rucksack, you go and pay for things in Cape Verdian Escudos and up getting the change in Euros. Or a bit of both, mix and matched we paid our way. Stray dogs that would run up to you only to wag their tails and want to play.

But out of all the things on this journey to take in and take home with you, all the people, all the places and all the experiences, it was a bit of Spain I took back with me to his homeland. I met an ex-Spanish Special Forces soldier who had been living in Boa Vista for over a year by now after serving his last tour in Afghanistan and missions in Iraq before that. I was quite simply intrigued and left in awe. He told me of how he had 'lived through it', of how he met Andy McNab of SAS fame in Iraq and over a few Strelas I found out how coca-cola had saved him in a firefight when it seemed his time was up. The American Special forces trooper who had gave him it had brought him back from the brink and brought him to his senses. The next time I drink a Coke (albeit in some Rum) it will be looked upon in a different way. I found out how on a mission he carried Rizlas ('cigarette') papers for wounds and also condoms that improvised as a life saver for lung injuries. Rizlas, condoms and coca-cola become a whole new experience. He will have plenty of more stories but they are not mine to tell, I can only tell you of these things.

There was everything and there was nothing. This island has nothing to give but it was gracious enough to let me take so much.