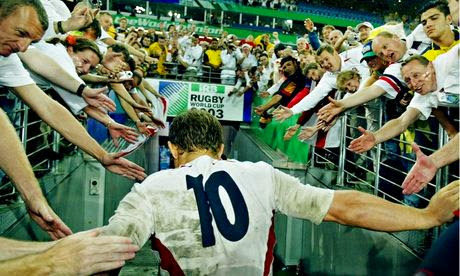 Dawn. It has always been one of my favourite times of the day. I love the way it calmly approaches you as you sit and wait for it after a night out, like I have done so many times; staying up for this climax before sinking in to slumber. It is the happy ending, a fitting cool-down to an energetic night, sobering you and preparing you for your bed like a bottle of warm milk to a baby.

Dawn signals a new day, a new beginning. A new chance, another journey to go forth once more. So the morning after the World Cup final and a just win for the Germans, at dawn it seems right that something dawns on me. An intense month of football is over, and I have deja-vu from four years ago (A summer fling), and from four years before that, and so the four-times multiple goes back in time.

There is now that gap until the new season starts. An empty gap.

For me, for football, and for my own sport of hockey, it's the same every year, but this time round with the season finishing and then the start of the World Cup, it seems like it was never going to end. The dawning thing in me wasn't this in se, but in this particular year of what else goes with it. Even though the cycle will soon start all over again, in two sports we have lost two vital components to the engine. The vorsprung durch tecnik of Ryan Giggs in football and Jonny Wilkinson in rugby. Both announced their retirements from their respective sports this summer. Two phenomena, two domineering figures. Despite the media coverage they both rightly received for outstanding careers, they seem to have been caught up in other things, namely the fever of the biggest tournament of the world's most beautiful game.

Maybe it is from now we will feel their lack of presence - and what a presence it was. Sometimes I think it is not right that people like this can stop, they have always been around when I have inspiring the world over, they should be blessed and have ten years taken off them so that they can continue to grace us. Except the world is not like that, it moves on, it keeps on keeping on.

Nothing lasts forever. There will be a deep hole to fill in both sports. There are times when it seems that these will never be filled. But eventually they will. After Pele came Maradona, and now there is Messi. We live the present with the little Argentinian wizard but we will never forget what the other two brought to this world. Ever. Just like Jonny and Ryan. A lasting fossil, an indelible memory. Yet like Josep Guardiola before them  - who carved out an outstanding pillar of a career in the first Barcelona dream team for so many years, to then become the club's most successful manager of all time - Giggs has moved in to coaching. Could he be the same? I think he is woven from the same footballing cloth. There is so much talk in football from Barcelona's and Ajax's examples about taking things from the grass roots, and to nurture to grow strong; Wilkinson has expressed his interest in coaching kids for rugby. I can't think of a better person or distinguished example to learn from.

Elvis left the building, these two have left the field. Though these guys have not left us. Because they can't leave us. That's not just a kind of order I'm giving, it will come from themselves. It is in their blood, they still have so much to give, and we should be grateful, we should firmly shake their hands and smile. They are to become responsible for a new cycle. They will lay the way for future champions. As they walk off the pitch and hang up their boots, the sun sets with them. But they are the ones who will make the sun rise. They are the blazing sun and they are a new dawning.