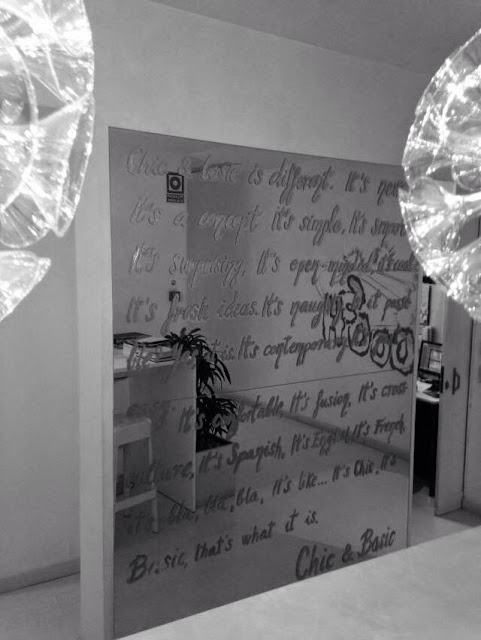 I don't think a trip to Barcelona could have come at any better time. We had first thought about Lisbon but when flights were just too expensive for a weekend break, Barcelona fell nicely in to our laps. I hadn't been there since 2007, also a time when I was looking for something to perk me up. As soon as put forward my first one-crutched step from the shuttle bus on to Plaza de Catalunya, I felt nourished.

Nourishingly creative, that was the kind of menu I wanted to eat from. I am against the regional President Artur Mas and the people of Catalunya wanting independence, it has to remain part of Spain, it's modernism has to drive the tradition. It nourishes Spain in the way London does to England. It has to remain. It has to show a different side, it has to breathe life. Of anywhere in Spain I have always associated Barcelona with inspirational creativity. Antoni Gaudí planted the roots to this all those years ago, and still they are growing in the form of the Sagrada Familia which - even though the building site interior is not worth so much to pay and see at the moment and for a few years to come - continues to take shape, a emblematic stone carving of a giant beanstalk whose leaves are sprouting. There is no other building like it in the world.

Of course there is Parc Guell and his Casa Batllo and Casa Milá, but this is not all of Barcelona, this is not all there is on the city menu. There are nibbles everywhere, you can architecturally tapas all over in Barcelona. Just look across the road from the roof terrace of Casa Milá and you will see twists and turns of stone and wrought iron and concrete next to hard lines and sheet glass. It just works. Expression, innovation, adventurous and stimulating are all small tapas dishes on this menu.

Walking though the Barrí Gotic was like smelling on salts, but saying that so was dawdling through the streets of Eixample. It brings you around to sounds, shapes and smells; one is narrow and twisting and soulful of the city, the other a network wide avenues, grid streets and angled corners constructed from distinct buildings. Still recovering from knee surgery and now down to at least once crutch, I still had the fervour to keep walking.

To delve in to the bustle of La Boqueria, to wander the stalls and be inspired so much by the food as to buy €20 worth of dried fruit in a stall rich with colours like any Indian or Turkish spice stall. To sit at one of the bars and eat street-style and be almost rewarded with a Mojito tasting sorbet at the end.

It is no wonder Ferran Adriá has been at the forefront of Spanish cuisine, for me benchmarking Barcelonsimo in his food. He has been quoted as stating that he takes well known dishes and transforms all or part of their ingredients with the idea to excite, provoke and surpise a diner. Well I am not a vegetarian, but the restaurant we chose on the Saturday night did exactly all that; it inspired my stomach.

It is a privilege to have all these things at your fingertips, and the people of the city are right to be proud. But they need to be shared. The day I buy my own house, with my interest in minimalism and design, it will be to share with friends and family. Barcelona please don't cut out the rest of Spain, We don't want to cut down the beanstalk and take from the giant, we just want to admire it. And please lower the overrated prices of Hotels and moreso, bed and breakfasts, even though just coming back to the basic all white interior with a splash of an orange Smeg fridge, eyecatching lighting, and a red flower plant pot on the wrought iron street balcony kinda made me feel like I was at home. I started to walk around without the crutch in the room. It was a good feeling. The whole weekend felt right, I digested well.
Email Post
Labels: Character Culture Living People Places Smells Travelling