Up on the common 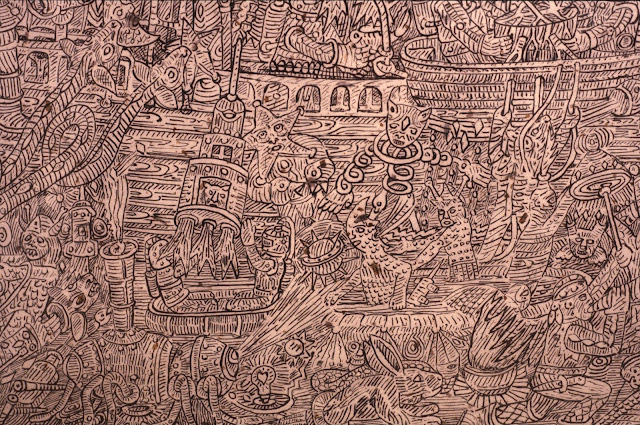 Leon wouldn’t tug, he was a good walker. He kept pace right by his owner’s side all the way up to where the concrete path became a gravel one and where the grass common started. That was the point a little tension would wire in to the leash as his nose extended to the ground, sniffing his way along and then looking up with those ‘Can I yet?’ eyes at his owner.

He waited patiently for that moment where he heard the click of the latch on the leash and a smile back down at him. Then came the scruff and pat on his furry blond Labrador head - that was the moment he was in his place, he was away, like a canine equivalent of a freefalling, basejumping human, his ears flapping like a wingsuit. He always stayed within sight of his owner but he had to get to work and go find that stick to bring back to him amongst other things, especially the dump he was ready to offload. He made a point of doing near his owner beforehand so that he could pick it up and dispose of as a good owner should do. He wanted to be a good dog. He would do it on his own of course, but unfortunately he wasn’t programmed like that, and right now his program was on run and sniff.

While Leon bolted off across the common in short, sharp, zigzagging shuttle runs between flaring sniffs of scented grass, along the gravel path through the roll of green which continued to rise, his owner’s breathing slowed, becoming deeper and almost soothing. He was in his place too. Yet as much as he felt relaxed and as free as his canine companion, his mind would not follow suit with his breathing. It travelled and hared around the place as if chasing and playing with Leon.

That was maybe why he actually came here on days like these. If wasn’t just for Leon, he also needed to let his thoughts rampage across this common as much as his dog did. During the week, when there wasn't time for long, timeless strolls, they would walk different routes, especially in the wood across from the park. On the common was a blank page, with only green to distract and lay down as a foundation to their day. Days like today were special days. A Sunday up here with not a cloud in the sky was the dog’s bollocks, having the whispy image of the late afternoon man in the moon looking down on him was being able to lick them. That is how Leon would probably describe it anyway.

He remembered summer holidays as a kid in the garden, lying on his back on the lawn, staring up to the clear sky and seeing the moon and his full face. He always wondered why it was there during the day, as far as he understood night time was moon time. He never actually asked his parents all those years ago, but he was happier just to have his big, round face there. They quickly became friends. Moon stared a lot and didn’t say much, but his smile was comforting and over time he proved to be a great listener. These days nothing much had changed. He wasn’t always there, but those days when he was hanging around in the clear sky, he knew that he just had to take Leon to the common.

As he swung the leash around in his hand and dawdled up the knoll, more green sprawled out before him. At its highest point he came off the gravel path and wandered on to the lush grass and sat down cross legged, summoning the Sun to join him and Moon and warm his thoughts. He took off his sunglasses, closed his eyes for a moment and tilted his head up to the sky. When he opened his eyes, Moon was there, his greeting look meeting his gaze. He smiled back, exchanging the greet and then looked back across the common, his peripheral vision catching sight of furry blond four-legged movements darting about as if joining dots in the grass.

That was when the conversation picked up, slowly at first, then becoming more fluid as he asked himself more questions. Moon listened more than anything else as usual, but his energy managed to mirror back cosmic, thoughtful answers. As Sun warmed him while he sat, solar-powered thoughts fuelled the silent conversation more. They could go in any direction across the common, just like the blades of grass did as he brushed his hands across them while he sat.

So he asked Moon in which direction he should go.

He set his radar and program for cosmic and tuned in for answers. Just like all those years ago when he would ask if he should continue playing with Action Man or bring his Lego outside in to the garden instead. He was always conscious that he was boring Moon with his constant questions on the few times a year they would meet, especially after all the years they had known each other. Moon had the patience of a saint, he had learned that in the last few years and that was why he was a good friend. He wondered if he belonged up there with him, somewhere in the sky or space, magnetising. But that was part of his questioning, the reason why he came here, he needed to know where he belonged.

Moon’s answer was consistent, if not mystical. He would never give it straight to him, he would have to work out the silent riddle himself. To be fair, he didn’t know if it was a place or a person, or both, or if one was more important than the other, but being on this common opened him up, laying out an open green canvas ready for him to paint his very own trompe d’oeil on it. That was largely what he managed to work out from Moon’s reply. Each time he came here he subconsciously knew he had to get off the path and on to the grass, he needed to get away from that gravel way which was leading him and make his own path. He needed something he could hold on to which he knew wasn’t the path.

He had no idea of how much time had passed, he always made a point of not wearing a watch on Sundays, but Sun had had a long day and needed to go. Moon would still be there, stronger than ever as Sun made his salutations and then his way disappearing over the horizon. He felt blessed to have them both for free, he would never take them for granted. He would have laid there longer to wait for the stars to take Sun’s place had he not felt a pant creep up on him from behind and then a big, rough tongue lick his forehead and face. Leon was back with a stick.
Email Post
Labels: Blogging Emotions Fiction Living People Places Thoughts Words Writing