Literally hours after I posted my previous entry as I do every new year, after taking those first steps in to 2019 that I wrote about (The big picture), my feet were suddenly swiped from under me. I was floored, ko'd.

Exactly 7 years a go I started following a fairly unknown Canadian indie-pop band called Walk off the Earth. One of the band members, Mike 'Beard Guy' Taylor suddenly died in his sleep from natural causes the night before New Year's Eve.

Back at the start of 2012, I had heard of this five-piece playing the shit out of just one guitar on Youtube that has now had nearly 186 million hits since. It got them fame and a fully-deserved record contract for their sheer musical talent. I have written a couple of posts about them and how their creativity inspires me, how they influence me making me write (Imagination rules, Imagination rules dejavú). On that Gotye cover, at the far end of the line up was a guy in a beanie and a beard. Just one comment from someone saying 'who's the beard guy looking boss' and that was it, a living legend was in the making. He became an icon and a quirky character who everyone would wait to see the wacky way he would appear in the videos the band uploaded after that.

Just like I spent a whole day looking through their videos on Youtube after discovering them, I scoured the internet at the news of this tragedy. I didn't want to believe it, I wanted it to to be a hoax, a piece of fake news like all the bullshit stuff we are hit with in the media these days. Then when I saw the band announcement on their facebook page, my worst fears were confirmed. Yet still, in the first few days of this new year I still could not believe it.

With the beard and steely blue eyes, he looked like the quintessential poster Canadian lumberjack, he could have played the part of any ice hockey team player. Yet he gracefully blessed the keys he touched with deft fingers, and his Christmas 'Beard guy ballads' at the piano showed his classic soft side who could have had Bing Crosby alongside him by the open fire. His Bohemian Rhapsody solos at Walk off the Earth concerts were boss. You'd even like to think he is now jamming with Freddie, somewhere where raw music talents just simply do their thang in the afterlife.

What I just wrote above I wrote like I usually do on a Sunday, like on any given Sunday, but this particular Sunday was the 6th January...the birthday of my later father. What is more, my dad was known for his beard. In all my life, I only remember seeing my dad without a beard when he was going through chemotherapy. All those other years growing up he was my beard guy. He died when he was 51 years old. I had no idea how old Mike Taylor was but he barely looked a day over 40; after spending some time to curiously look it up, it seems he was a bit older than the rest of his band members. He was also 51 years old. A healthy, clean living guy dying in his sleep. Injustice rears its ugly head. And then I let all that sink in for a moment...the age, the beard. Double whammy. On reading about his family life, his son is a peewee ice hockey player who I saw wearing the number 15. My lucky number when I play hockey. Numb. A wave of whammies.

So it has taken me 3 weeks to come back to this page to continue writing this post, I felt immobile, a boat battered by the waves, I didn't know whether I should even post this. It is so uncanny. I often wake in the morning with a song in my head and it will stay with me on my way to work at least. These last couple of weeks I have been waking with a Walk off the Earth song in my head, nearly every morning. Call it a calling, maybe I had to finish what I started.

Then I watched the tribute concert the band's home town of Burlington, near Toronto in Canada, put on for him. It was hard to watch yet a joy to see; ordinary people being extra ordinary, a bit like him really. I wrote about Prince when he died in 2016 (Unplugged intimacy) so I simply had to do my own tribute to Beard Guy. You might be reading this still asking who the hell Walk off the Earth are, but anyone of the growing following of this band will know how as a musician, he would not have been out of place alongside the man with the purple guitar, another talent taken too soon from this world. Maybe Prince is in the same jamming session with Mike and Bing....walking off the earth somewhere.

He was so much more than the keyboard player and multi-instrumentalist (like all the other band members) in this band. A father of a 16 year-old daughter and a 14 year-old son which I can't help thinking of my youngest brother on my father's passing as a 15 year-old. But hey, what a daddy cool. He was the successful owner of a freight company which he still managed to run and juggle with his music commitments, you couldn't keep it more real. He was playing in the band simply for his love for music, he was living a lifelong dream which started once in to his forties. He was an ice hockey coach to youth teams and played regularly in the Juno cup, a Canadian charity match between musicians and ex-NHL stars.

He was loved by so many and he loved playing up to the Beard Guy character, yet by all accounts, he was just simply Mike - a great all round, kind guy with a great sense of humour who could mix with so many different people of all ages. He had the qualities that many men aspire to. I never met him or have seen the band live yet, it seems strange that he can touch from so far, how this seems so close and personal. Perhaps that is a sign of a truly great person, and great people need to be celebrated, they need to be made known, that is why I felt I had to write this, he was an example of how you can live your dream with integrity and keep your feet on the floor, don't let your dreams die, damn it.

So now you know, the legend he has become will live on. Maybe he is more, maybe he should have 'BG' on his chest and wear a cape. Because in my world, beard guys in hats are kinda like superheroes. 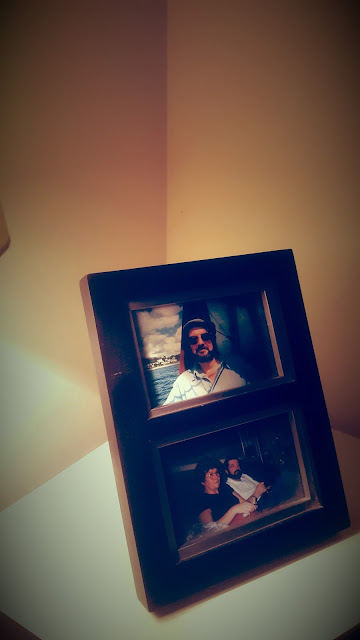