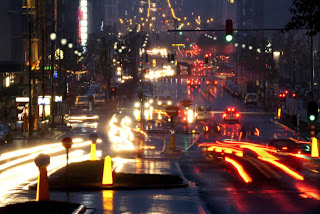 One night this week after training, I found myself driving through the streets of Bologna before heading home. After years of coming here, I still don't know my way around that well. I know that's because I don't usually drive around, I'm in the car with somebody else driving and I don't really pay attention. Put me behind the wheel on my own and I realised I still get lost. I needed to open my eyes and really look.

So that night I started to drive around my new home city. It's strange how different the city looks during the night compared to the day. Different traffic flows, different lights. I love the city at night. Cruising through the streets with the stereo on and some cool tunes instead of with haste like during the day I felt tuned in to it all. By night everything seems so much more intense; all the bright lights, big and small, the stream of street lamps lining down each street. Neons from bars. Sprawling, highlighted advertising boards glaring down at you. Traffic lights have a different appeal by night as you queue with all the other cars waiting for them to change. There is something about the city at night that the day cannot give.

Listening to the tunes, tapping the steering wheel, I manouvred my way around wide humming streets, dodging down sleepy side streets and the small glimmers of lights coming from behind shuttered windows, some open, some closed. The gasp of a large square as it opens up in front of me as I sneaked out the side streets.

It was at this point one particular tune came back to mind. A tune that I hadn't heard for a while and could not believe I had not played for a long time. City Lights by Last Tango (Boys Own Mix), a tune from 1990, anybody serious of their club music will know where I'm coming from. It was when I was working at The Kirk as a barman a year later that it entered my head, to be locked in their forever. It was the ideal tune for my drive that night.

So I rushed home and scoured Itunes for that Boys Own Mix by DJ Terry Farley, found it and downloaded. I played it over and over again. And all the next morning the words and the piano riff never left my lips.

Windows closed, curtains drawn,
Is it dusk, or is it dawn?
The only light you'll ever see,
is on TV