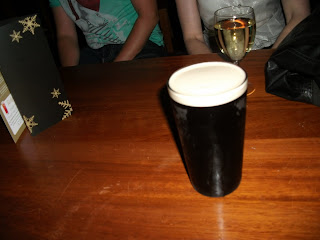 Whenever I go back to England, one of the things I look forward to is sitting with my mates in an English pub talking mainly about football, more football, how we hate the Americans calling it soccer and then turning in to a selection committee as we sort out the England team. Amongst other things.
This time around will be a little different. We will also be talking about three of us moving and the other one having moved house and having his ceiling fall down in his kitchen after all that hard work I did decorating it...And don't be thinking I'll be redecorating this Christmas for you, Moo...the only thing cylindrical in my hand will not be a roller but a can of beer from your fridge ;-)
Anyway, all our initial conversations will be done in the pub, with myself personally enjoying a pint of Guinness. And boy do I enjoy it!
My first pint of Guinness. I remember it like yesterday. I was about 20 and a bit of a lager drinker until one day the draught lager I drunk in one particular pub broke. Only pisswater, er sorry I mean a weak sembrance of lager was available. Ale has never been my cup of tea, but the Guinness draught was standing loud and proud in front of me. I had always liked the look of a pint of Guinness, how it looks so smooth and cleanly cut between the black and the white resting on top. The Guinness whisperer was speaking to me much louder now, asking me to just try it, just once at least. So I did. Looking at it was like having the opportunity if you are single to sleep with a Supermodel; why would you say no?
Jesus, it didn't live up to the Giselle Bundchen image I can tell you. It was like sleeping with a supermodel who was crap in bed and just layed there. It was bitter, and not like the adverts made out. But having a few pints of lager in me, it was manageable, more than the Ale for sure. Just.
So I had that pint, I finished it.
The next time in that pub, I decided to have it again. Purely out of impulse, a sign of so many things in my life. Maybe because the lager had rapidly gone down to the relegation zone in the lads' league table of beer (sorry that's the football thing seeping through again).
And that was it, I have never looked back (I just made that sound like a major achievement didn't I? Hmm, well, yes, er...) I am now a Guinness drinker through and through. I was converted thanks to that draught lager breaking. How many times does the smallest thing change your direction in life?
I met my Irish mate in Italy over a pint of Guinness. His dad owns the oldest family pub in Dublin known as the 'Gravediggers'. He showed the owner of the bar we were in how to maintain the cellar and achieve a damn fine pint for his punters (namely, us). When I go there I drink the first pint in barely 5 minutes. Honestly, I enjoy it so much. I have since done the 17 pints-thingy in Dublin (I seem to be noting achievements in life around booze here today...) even though on New Year's Eve and not on Paddy's day.
I am coming to a point here (I am not actually drunk and drivelling on despite what you think). That is, things need a chance. If it is always bitter at the start, it will get sweeter in the end.
P.S Back soon fellas, mine's an ice cold Guinness. It's snowing outside and freezing but in a nice warm pub and a freezing pint in your hand...oh that's a great contrast.
Email Post
Labels: Culture Living People Places Seasons Things