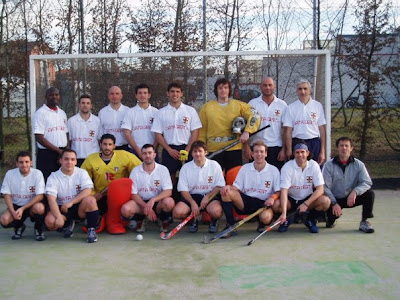 There is a general agreement between men - we will never figure out the mind of a woman. We can't live them and we can't live without them. But if I'm fair, we men make up the other half;  it does take two to tango. And if you have ever watched a couple dance tango, if those two halves move in perfect harmony is is possibly the most whole and passionate, make-you-feel-alive dance there is.

Both women and men can dance, but can women chase a ball? Maybe the question is: will women ever figure out why a group of guys chase a ball? Guys and balls go hand in hand. And before you comment or snigger in a British toilet humour fashion, maybe read the my entry here: Boys, Balls and Joga Bonito.

I have played a team sport for over 25 years; I hereby staunchly defend my kind, my pack of wolves, my hockey team. I  grew up like this, I will forever live like this, that is, chasing a ball; I have a squash ball I play with at home, I have a sponge ball I throw around in the office. In a team, everyone on the pitch has his role, his contribution, what he has to do for his team mates, for the team and what essentially is the greater good. Whether you're a Centre-back or Centre-Forward, a Left-Winger or a Right-Back, whether you cover a few roles, there are two rewards for your efforts, well, two rewards if you win the match that is, because that is one of them. The other is something that goes further than that, it is a journey you have taken in which you will never travel alone. It is the sense of belonging and friendship. It is the battle for what you want and believe in. I have said before how I love wolves A wolf never leaves his pack; well this is my pack and we defend each other to the teeth. We are brothers in arms.

I have played so many matches, had so many scrapes and seen my own blood, pulled muscles, felt pain from the impact of a stick, ball or body, taken hits and dished them out for myself or for my team mates, got so damn pissed off and have been sent off more than my fair share for being so damn bad-tempered, sacrificed so much time and even career choices to travel and play at the weekend and train during the week, argued and told people exactly where to go in all the languages I know and even in ones I don't know, spent so much money on hockey equipment, that I can almost see why most women may struggle to ever understand. The day I came home with an eye all closed up and bloody-black looking like something out of a Rocky film, my mum though exactly the same thing. She even indirectly told me that I should stop playing. Well, we know how that advice crashed and burned.

Off the pitch is doesn't stop there. In Bologna there is a hut with a draught beer right next to the pitch which was shoved in to your hand as soon as you had dropped your stick. The third half begins. I have had so many laughs off the pitch with my boys that my sides hurt. I have slept in many hotels with a group of idiots and animals, that just make me laugh and smile, despite losing many hours sleep between beers and practical jokes. All the knocks and pain are forgotten, the laughs, never.

I have done all this and continue to do so because it is my passion, it matters, it is on the pitch with a group of guys where I belong. All this has shaped me, has made me belong. And we all need somewhere or something to belong to. I have lived in various places, and I don't know where I will 'end up', or even whether I will end up in just one place - maybe I'll just keep moving, but I know to what I belong. And those of you who have read a short post #15 will now maybe understand why. We are wolves, we are are social animals, and sometimes I feel like Mowgli when I think of how I have been adopted by that pack in Bologna. My home town team - with guys I have grown up and still see and hear from - shaped my life in the earlier days of my hockey voyage; a group of guys that lived in each others' pockets at times.

I wrote all this in my notebook as I sat on my own in Valencia airport. All my Bologna team mates had just boarded the plane back there after a weekend stag-do for one of them. I had joined them and was now waiting for my flight back to Malaga. And it was in this moment when that sense of belonging hit home again, at how I wanted to be on that plane back to Bologna. The pain from my hockey weekend this time round was alcohol inflicted, but again it as soon forgotten as I continued laughing to myself at what happened during the weekend. After all, there is still the wedding day to come. My only fear is the day I won't be able to run out on that hockey pitch any more, it will be hard to grow old gracefully. At least the beer will still flow along with the laughter.
Email Post
Labels: Character Living People Places Sport Travelling