Wormholes of my imagination 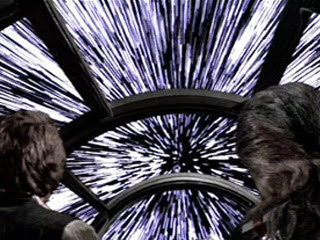 I woke up on Wednesday morning to something quite spooky - Stephen Hawking had died. To me it was spooky as last Sunday - only three days before he passed - I had just watched for the first time the movie about his life, The theory of Everything. I had wanted to watch it for sometime and was one of those movies that I had never got round to seeing. It was as if Spanish TV had foreseen his death, better than any doctor had done when he was diagnosed with a form of Motor Nuerone disease, and had put an early tribute on air. This was the week after the same TV channel had shown Martian (starring Matt Damon), a movie about space travel to Mars, something that Hawking endorsed based on his concerns for the future of the Human Race, stating we would eventually need to colonise other planets before any eventual disaster for humanity on our own planet Earth.

The man was arguably a genius.shining brighter than any other star in the universe that he studied. Though for me it is just as much about how he put himself out there in his beliefs and passion for life despite his physical disabilities. He got the human race to really think about the vastness of the universe. His whole life was a thesis of  researching those beliefs, dedicated to finding out where we really do come from.

And then there is his book, A Brief History of Time, about the big bang and black holes. Cue Andrew and his wandering mind; I step in with few science brain cells to rub together but with a firm belief in it and not that one big guy in the sky sculpted us all. I have been thinking all week about the infiniteness of the universe. And before you ask - no, I haven't been smoking anything illegal. Every now and again I go in to my own zone and actually try and put it in to perspective. I always have done in my own Kindagarten way compared to anything Hawking's studies have paved a way. Infact, ever since the day of my earliest memory at 3 years old, falling off my toy tractor in the garden one afternoon and looking up to see the moon in the daylight, and the face of the man in it.

I remember a few years ago laying on a sand dune in the dead of the night on the Cape Verde island of Boa Vista in the Atlantic ocean. The surrounding pitch black exaggerated the explosion of thousands of diamond polished stars that I had never seen before. It was so serene. I thought of nothing and just gazed up, and I thought of everything and joined up the stars in so many different ways. The patterns were endless, just like the universe itself.

Maybe I should read Hawking's book, because my imagination and science capacity lead me elsewhere, especially as a Star Wars geek. Talk about space travel and I get lost in fantasy at how Han Solo and Chewbacca made the Kessel Run in less than 12 parsecs in the Millennium Falcon. I have no idea about the laws of physics, but is a black hole where these laws break down? I mean for a start, is it hot or cold in a black hole?

What if you fell in a black hole? I start getting so warped, I become a mole clawing and furrowing through the very fabric of reality. On the edge of the hole's mouth teetering inwards, would we stretch or contort? Would we cave in? Implode, where nothing can escape, not even light itself. G-Force having nothing on its power.

What the hell is in there? Are there any shadows?

Would we still see stars? Would we orbit? Would we contort and bend and become a magician's trick? Would we have any control?

Would we disentegrate in to millions of particles? If only we could energise with Captain Kirk, teleport and see. To come back and tell the world, regurgitated from the belly of the whale after being swallowed in the storm. Maybe George Lucas found the answer in hyperspace is to make it through, travelling along the wormhole passages, if there is an exit on the other side that is. Drop a coin in to the well and listen so carefully, because it may not hit the bottom but may insted hit something else like playing intergalactic pinball. Prepare for the jump Chewie.

Hawking said that black holes give off photons and lose mass in doing so. If Han was an expert at dodging his way through an asteroid field then maybe if he had Einstein in the cockpit too as a navigator with his theory of relativity and how mass and energy are equivalent, they would be an unbeaten, champion showjumping racehorse.

But if we have use hyperspace to get through a blackhole, wouldn't it be too quick to see anything at all around us? We wouldn't know what was in there. Only white lines, going through my mind. Something like a phenomenom, baby. Can we travel without moving?

And then as I try to take my head out of the black hole and come back to 'normal' space, I wonder if Stephen Hawking has ever got stoned.

I mean, smoked a spliff or a bong with his cosmological homies and then tried to make sense of the world. I wonder if he was a Star Wars fan. I wonder if he believes there could be a force. Maybe he and Yoda could hang out together. The thing is, just like knowing if there is anything after death, nobody knows what's inside a black hole, only theories exist. The force and hyperspace are theories...

Which is stranger, fact or fiction?

Motorways of my Mind becomes Wormholes of my Imagination. Maybe my mind is in a galaxy far, far away and I don't know how many parsecs it will take to get there.
Email Post
Labels: People Places Things Thoughts Tributes