The fork in the road 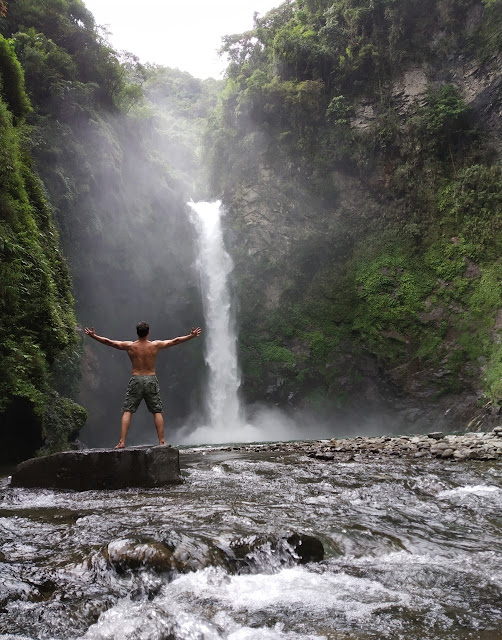 Looking down on the rice terraces from the small hill village of Batad, my guide, Fred, asked me:

"So which route do you want to take? The shorter one or the longer one?"

I didn't even hesitate in replying: "The longer one."

He raised his eyebrows slightly at the speed of certainty in my reply without him explaining the difference.

"Are you sure?"  Even the 10-minute walk from the road where we had parked his chugging motorbike and sidecar ride was a winding one, up and down to the village viewpoint where we stood on the side of the valley overlooking the rice terraces.

We talked as we walked - Fred constantly giving me the background and history of the area and how the terraces were run by the local families - and I soon found out the shorter one was basically a steepish decline in to the terrace, into the valley bottom fields, to an easy-going walk along the 2000-year old stone walls of the paddies where they were fertilising and preparing for next year's plant. The longer one was still along the stone walls, but those at the top of the terrace, the cheap seats of the auditorium-like stadium enclosure, where a demanding and steep decline followed by an even steeper incline to skim the top to tower down on all the light shades of green and water. I stood there sweating and getting my breath back despite being a trained and fit sportsman, the view was certainly not cheap. A vast, wet, green backdrop stood before me like an auditorium of nature. If I had taken the shorter route I would not have been able to take this in in all its entirety, it would have been like not doing a thorough job, I would have never got the big picture.

Moving on, we descended in to the valley. The heavily vegetated V-shape met at the bottom where a small, fast moving stream powered by the waterfall we were heading to. It had rained earlier in the morning and the heat had already evaporated the mist that usually hung on the valley tops of thick vegetation. Ever-so-appropriately, a rainbow rose and formed, only slightly spouting from the mist like plants from the soil, its colours contrasting beautifully against the green landscape canvas, curving down and in to the valley beyond to where I was heading, the waterfall would be the pot of gold at the end.

Yet is it the end of the journey that we need to live for? The motorways of mind have always told me differently, it is behind everything that I have written here over the last 11 years. There is the actual journey to savour, these colours and this view to relish, in spite of how great the waterfall will be to see. Many times we can never know what the waterfall will be like, or how much gold will be in the pot. It can even be a risk to go there, to start down that long winding and bumpy road, so if I'm gonna go down there I have to enjoy the ride, I have to know how to ride that wave so that it doesn't toss me off and send me tumbling.

That is why my reply to the guide was so speedy. That was why I didn't hesistate to go down the long route. Often we come to a fork in the road and we have to make a difficult decision which way to go. For me this decision is not really that difficult. I know what is down each way - the easy way and the hard way - and yet I have always ended up choosing the most difficult route.

I have no idea why. There are times when I say to myself to just take the easier route for once for Pete's sake, but my conscience hovers on my shoulder when that suggestion comes up - he's ever so convincing when he tells you nothing ventured, nothing gained. Telling you about this day in these Philippine rice terraces will say that it is experience that tells me to do so. Sometimes I just think I am wired that way, it's bigger than me.

All I know is I can't leave it to chance, I have to make that calculated gamble that the hard way has more to offer, more to learn from and more ways to build resilience. I have learned in life that we can wait an eternity and spend too much money on the national lottery, saying good luck to ourselves each week all the way to our pension days, when the only real way I see to make things better is with hard work. I don't think luck exists, instead I roll with the Roman philosopher Seneca who said getting lucky is just a point in in time where opportunity and being preparation meet, and then knowing how to reel it in - see, you still have to work on that rod. Instead, I am still looking for an answer for bad luck...

As you can see the waterfall was quite impressive, at least it was for me in that moment I had there to myself after waiting for the few others to leave. There are much bigger and more impressive waterfalls for sure on this glorious planet, but this was my waterfall in that very moment, a moment to savour, even my guide understood as he waved me on with a smile and let me be while he sat on a rock and prepared and chewed his moma. He even took a great photo for me. He understood so well his own land and what it means to be here in the moment, he was just sat there enjoying the ride too, despite how hard life can be, he knew how to make the most of everything that comes in to his being.