A tribute to Brian Filipi 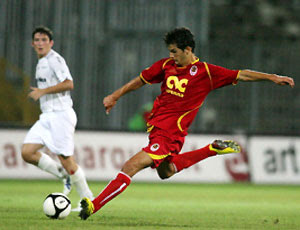 Today is Sunday, the day I usually write, the day I try to sum up my week and how my life's journey goes and what makes it tick. Well today should have been any other Sunday, infact I have just come back from Spain and Seville and have got shed loads of stuff that is making me tick. But I can't write about any of it, not one bit. Not when a guy I know has had his life's journey cut short.
On Friday night Brian Filipi, a guy of only 20 years that I know was hit from behind and killed by a speeding car in the town centre where I used to live while walking home with a team mate. I am lost for words. Non ci sono le parole.
Brian was a great guy, humble and educated towards everyone he knew. Already a firmly established U21 player for his home country of Albania, he was an emerging football star in Italy's Serie C playing for Ravenna, with teams like Palermo in Serie A showing great interest in him. It was only a matter of time before he was playing in the top flight. He had so much talent and it was beginning to show, he would have become even better than his ex-international footballer dad Giorg Filipi for his country. Now as I write this on a beautiful sunny Sunday as the teams of the Italian League prepare to take to the field of play, Brian will no longer be lining up with them.
My heart goes out to his family and the close-knit circle of friends who loved him and what he did so much. Too them on the field he was quite simply incantevole. I have just been speaking to my friend Sergio, a personal football coach who was working with Brian. My heart goes out to him too because he believed so much in Brian. It's like a part of him was in Brian. Brian was a shining example of how if you put your mind to it, you can do it. He was valid of a Nike advert; he was Just Do It. I too play a team sport and know how much it means to feel a part of a collective. Brian was a big part and was dear to everyone around him. He gave respect and he commanded it, at just 20 years old. He should have had such a long and successful journey ahead of him. I dread to think what Stefano Scappini - his team mate who was with him who luckily was only brushed by the speeding car - feels right now; he saw it all.
I remember playing 5-a-side football for the first time with Sergio, Brian and his dad, Giorg, a few summers ago. Brian's dad still had the same masterful left foot and movement for an ex-footballer in his 40s as he did years before. He was still as graceful and determined and made the team tick like in his playing days. You could see where Brian got it from. Even at the time when he was 15 or 16. 'Watch this guy, he's gonna be amazing in the future, believe me,' were Sergio's words. My heart goes out to Giorg too.
As the shock still tremors in us all, I cannot find any more words to write or say to make it easier or to help. I just wish Brian's feet were still around to do the talking.
R.I.P BRIAN FILIPI (11 agosto 1989 - 18 settembre 2009)
Email Post
Labels: People Sport Tributes