Sport and the simple things 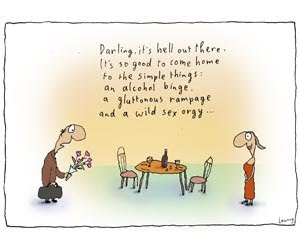 Around about this time of year is when in sporting terms you have to dig in deep. In most sports like football and my sport - hockey - the championships are over half way. It is when, especially after the Christmas break, the tiredness kicks in. Just when you really don't need it. It is the crunch time when whatever you have achieved in the first half of the season can be a great base for a gran finale, or it can crumble away from under your feet as results start to wain and you run out of steam.

For me it is a challenging period. I suppose it's because the month of February has come around and that the Six Nations Rugby championship is well under way like every year. It gives me that recharge to see 30 guys hammering in to each other for their respective nations and when you wish you were on the field with them, even though I haven't played rugby since school. I go to hockey training in this period with a vigour and great expectation of the second half of the league. I want to run around after a small piece of hard, round plastic with my stick and get down to the nitty gritty of it all. Afterwards when I stand for what seems like hours under a hot shower and then slowly dress and shunt myself in to the car and up the stairs and home after two hours slog, three times a week, I realise my passion no matter how hard it can get. It is the same as fifteen years ago.
Tomorrow is also my birthday and as I head in to my 37th year I realise that it is starting to get a little harder and how much I need to watch Jonny Wilkinson and co. during this month, aswell as the ice hockey in the Winter Olympics, to spur me on. It fuels my passion and gives me energy to work hard in training and bust a gut to reap those rewards on the hockey pitch week in and week out. That to get what I want I have to work hard for it.
Just having that extra year to my name now is a challenge in itself and gives me the will to keep on top of things and look after the basic and simple things when in life we ourselves can complicate things so much.
Maybe it's that sense of urgency I wrote about a couple of weeks ago prevailing.
So as I get inspired in a sporting sense from other great sports happening in the month of February, and get ready and raring to go again, the fustration of having a broken tendon in my finger keeps me away from my cherished hockey stick (does that sound geeky?) and whacking the shit out of a ball (maybe that's less geeky). A silly little break in my middle left finger (the main gripping hand on the stick in my sport... hmm, maybe getting too technically geeky?) holds you back for over three months. It makes me appreciate the simplicity of things and how they can accomplish so much for you and how they can also take things away.
I realise the importance of the basics more than ever right now. I am reminded how important hockey is to me (and sport in general). I also realise I'll be on facebook for some friendly rivalry and rugby banter with my Irish mate as we prepare to dual in two weekend's time...and also put up with his grinning chants of "you'll never beat the Irish!" and "Slàinte! F@*k the English!" as usual :-D Oh I think I'll just go and write 'bring it on big boy' on his profile page right now.
Email Post
Labels: Character Emotions Living Sport Things