Until a couple of years my mum had a dog called Milo. Inevitably he passed away after a long doggie life and we are left like always in these cases with the good memories. One of those memories of him for me was when he used to get excited; he would go to his food bowl and eat.

He was never a big eater and gobble it up in one go like most dogs, but would eat a bit and then keep going back to it. When he got excited, like if someone came to the house for example, he would delve in and eat much more than he usually did. Some other dogs run around in circles or feel the need to pee.

Well the same thing happened to me today. I mean, no...I did not pee myself or gobble down food, but I got excited and very nearly could not sit still at least, but no so far as to run around the room.

The thing was I had just got back from Sunday lunch with two friends and was intending on laying belly-up on the sofa for the next few hours. At lunch we were talking about music and one of my friends asked me if I had seen the You Tube video of that group of 5 people playing a song on the same guitar. I hadn't, so she sent me the link. My full belly and lazy demure were determining a mid-afternoon nap after the late-night and mid-day feast when I got in. Once I had assumed the sofa position I booted up my lap top and logged in to facebook and sure enough I saw the You Tube link.

Clicking on that changed what my body had planned for itself. I sat up and got excited at seeing this group - Walk off the Earth - sing and play just one guitar between themselves. It has had over 33 million hits and I can see perfectly why. To come up with the idea is cool, to have the talent to perform it is taking it to the next level. These are seriously talented musicians. I clicked my way through nearly all their other videos in there. These guys are gonna be big. They have to be, with they deserve to be. It's not just the music, but the creative way they do their videos, how they can all play every musical instrument and all have great voices.

How bizzarely they drop a ukulele from above and they start to play it, how they swap instruments and use puppets of themselves. How a guy with a beard does the occasional strum but justs stands there; a bit of a wacko thing like the LMFAO videos with the dancing guy with a box on his head. That gets me going, that is my kind of imagination. It makes me smile to know there are other people out there like me too.

So they got me excited. As unintentional as I was to write, when something like this happens to me it makes me feel like writing and trying to get creative. I am tapping away now on this keyboard wihtout having a sofa nap I wanted and felt I needed, sleep can hold on for a little longer, at least until I spit these words out my system and on this page. I don't care how messy it may seem. I'm just going with the flow. Saying that, it is basically staying true to this blog if I am honest. 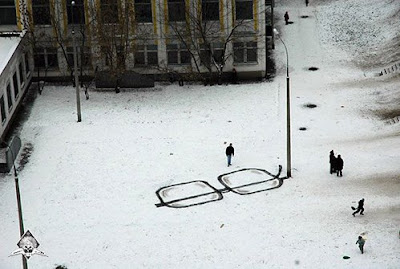 The photo above was posted on facebook by a friend of mine. I love people who are creative like that. Imagination rules, imagination rocks.I managed to scribble something on here, I scribbled some other notes in my notebook, it recharged me and took me over.

I have found the energy to make something for dinner now, instead of running around in circles and definitely not peeing myself, I think I could run through to the toilet in time ;-)I have wrote it before ( http://www.andrewgranville.blogspot.com/2011/01/peace-of-mind.html )and I will damn well go ahead and repeat myself...well, not me, but Einstein's words "Imagination is everything. It is the preview to life's coming attractions."