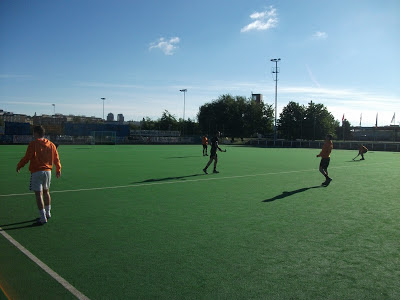 This week on Friday I went to Ibiza directly from my desk at work. Yeah, it was only a quick trip, it's Sunday and I'm already back, I only went for 56 minutes and 59 seconds.

I flew there. I was flying all along the way to be honest, the journey always matters. I got there immediately, I was immersed in the balearics right from the start. I felt the sun on my skin and through my ears. I could hear the lap of waves on the shore. I sat in Cafe del Mar and saw the sun set over Sant Antoni bay and I sat and waited for it to rise again. I was sat down but I felt myself wade in to the crystal Mediterranean water.

All the while my fingers were tapping at the keyboard and on the mouse. Or was I just tapping out a beat?

With my headphones plugged in to my ears I walked through the streets and around the white buildings trimmed with yellow of the upper Ibiza Town down towards the port, the sun in all it's glory on both, from glare to glitter. The bass rippled across the Mediterranean sea, the piano keys teetered on the break of the gentle waves, the synths nestled in the bays and the terrains. The most mundane task that I was actually doing became a delectable passage through the afternoon. At least for 56 minutes and 59 seconds while the album lasted.

I could see out the window the hard blue sky shrouding over us, I should have been away from my desk on a day like that. But I wasn't. I was still at work and I had been putting off a boring and tedious task of database updating for as long as I could. Fortunately my procrastination uncannily became good time management as I got down to doing it on a Friday afternoon as I dawdled in to the weekend. The music I had put on my headphones to get me through that task actually took me to Ibiza, I was no longer at my desk. My feet joined in the chorus of my tapping fingers and mouse.

Before Ibiza I had just come back from Prague - I mean really, I had physically been to Prague to play hockey. And there my headphones did the same job for a fair few minutes less, but all the same they did the job. On the short walk with my team mates from the hotel to the pitch Brazilian street beats bellowed in my ears on my Ipod, changing the ridiculous 8:30 am match start and therefore on the pitch warming up before 8:00 am. Never in the all the years I have held a hockey stick have I played that early. I am not an early morning person. But it became sublime with the early morning sun like you see in the photo. Rendered and ready to make music and bang out a beat with my stick and ball.

We can make things what we want. We can make a difference. We can but try.