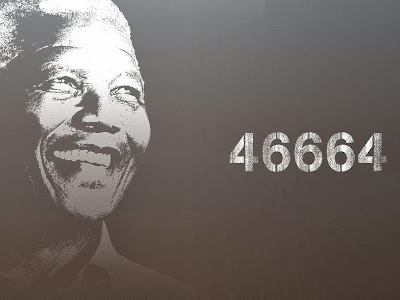 This Thursday just gone, the 5th December, we lost a legend. How can I not acknowledge this? How can I not pay tribute and not even write a few words here?

There are so many things to read about him at the moment, I feel almost out of place to add my tuppence worth. Even before his death, you could stand in awe of everything written about him. I remember only a couple of months a go dashing in to an airport shop to buy breakfast before legging it to the plane, and saw his big thick (auto)biography on the shelves, and thinking to myself, I will read that soon. Because that really is something to read about. That is a real biography, pages full of his 95 years. There is also the manuscript he smuggled out of the Robben Island prison which became a book; Long Walk to Freedom. University of life textbooks for reference. In your face Mr. 21-yr-old-footballer.

But what did he do in all those years? Even a life sentence of 27 years in prison only seems like a small chunk of his life. But he lived a lifetime of experience even inside his no.46664 prison cell. Just that I have difficulty getting my head around. But it makes me feel young and willing to accomplish. Already that is what he has done for us, or at least me. He has educated the world over - on top of his books you also have the reason why many writers and thinkers came out of the Apartheid regime; that they had a saying of each one teach one. So many men went in to that prison illiterate and uneducated and came out with degrees and PHDs, to go on to be Lawyers, doctors, professors and the present President Zuma. In his own words: "Education is the most powerful weapon which you can us to change the world". Put a Nobel prize for Peace on top of his pile. A graduate of the university otherwise known as prison.

For me, one thing stands out more than anything, and I realised this as I watched coverage of his funeral. In all his 95 years he quite simply brought people together. Most obvious and apparent, Whites and Blacks. But even in after-life, people come together because of him - USA and Cuba shook hands for the first time in over fifty years for whole world to see. Maybe nothing more than a handshake, nonetheless he brought them together; symbolic is a start.

From 27 in 46664 in his 95, he has risen as a man of forgiveness and compassion. Instead of getting back at the Whites for  the years of harrow and wrong doing, he welcomed them in. His grace stands taller than Table Mountain behind Cape Town, over looking his people, a mountain of a man over South Africa yet humble and worldly. Like Crazy horse who I have read so much about, he served his people. This status is solidified in these journeys.

"No man is born hating another person because of the colour of his skin, or his background or his religion. People learn to hate, and if they learn to hate, they can be taught to love, for loves comes more naturally to the human heart than its opposite."

Maybe it is my love of words and writing that spurred me to write this. Maybe mine cannot justify or come close to being just of him. But he knew about words, as his of 14th July 2000 I quote: "It is never my custom to use words lightly. If twenty-seven years in prison have done anything to us, it was to use the silence of solitude to make us understand how precious words are and how real speech is in its impact on the way people live and die"

For whatever he did, he is a global icon. The higher the barrier before him, the taller he became. His legacy lives on, never to be forgotten.