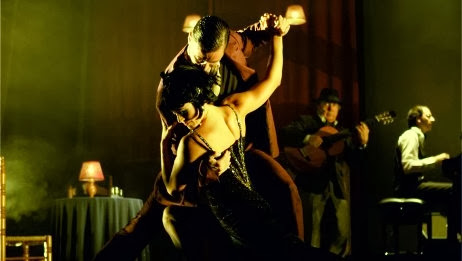 As the light dimmed and the thick, heavy theatre curtain drew back, the evening and the journey began. This last Saturday night different to most, in a weekend to celebrate, but still in the city lights and streets, this time and this night in Malaga.

I have wanted to see a tango show for some time now and the Broken Tango show came to town. If there is one dance I would like to learn it would be the Tango. There is something that breathes more than any other dance, emotions run high, I think that was the reason why it attracts me. Oh, and it is so damn arousing.

So as the stage took its stage, it lit up not just a dance, but encapsulated a way. The dingy, almost musty backdrop created an expression of the development of a culture of a country, of the Rio Plata. From the first violin string of the first musician, the crescendo took over. The double bass and the piano join in. A mood pushes me back in to my classic velvet theatre seat, and swooned over the audience and took us in to the barrio and the gloom of the burdel. The flapper-dressed bailarinas hang off Trilby-hatted men in three-piece suits who smooch through the doors, and on to the gloom of the stage, greeting their fellow compadres. Yet this is when the passion begins.

The whole show like the life of the Argentine people of this time time seems to hang on a chord. Countryside Gauchos and surviving civil war mestizos mixed with Europeans leaving behind former lives and docking in the port of Buenos Aires where a melting pot and a culture is born. The wheeze of an accordion as the last musician hangs his coat on the stand and saunters over to the other musicians to sit and take his place and the bellowed reed instrument between his hands. Out of melancholy a passion is born and bodies come together.

As the musicians continue their ceaseless emotion, strings are plucked and a giutar is added. Bodies entwine, long stocking legs wrap sensually around their male partners, whose steps in brogues and spats lead the way. Feet flick between each others legs that elongate, split and quick-slow glide across the stage on every tantalising violin string. Arms hold bodies tightly as if hanging on to a passion almost prefabricated by its society and prostitution. I had only ever known capoeira as a dance-fight, but now before me two bailarinos duel for the favours of a woman, against abandonment of the bailarina-minas with a tango fight of their own,
the accordian a constant companion to the mood. The pot-bellied singer shuffles on to the scene with his acoustic guitar and warbles mournfully of the putas and the pimps; of the ruptures of the two halves and of the profound rootlessness drowned in an evening of drink.

But it wasn't just Tango, it transformed in to poles and hanging curtains that the skilful and slinky bailarinas so gracefully took its evolution and brought its renaissance before us in the 21st century. Its journey progressed and continued.

And then so did we as the bailarinas, musicians and singers took their bows and the curtain came down. Out of the theatre and across the square we glided and embraced in the winter wind and in to the Saturday night centre we know so well. Malaga all lit up, clean and gleaming with it a buzz of people through the streets seemed a far cry from the dimmed wail and the sorrow so neatly dressed up in to a choreography. The contrast was mystifying but the cross over was smooth and felt uinque. It did not feel out of place, I could relate to both parts, and the journey from one to the other with the accordion humming on my lips. The suit fit well, there was no stumble on the journey, well not until a few cocktails had been sunk.

It was a whole story in one night and this is my little story of a night. Buon compleanno amore.