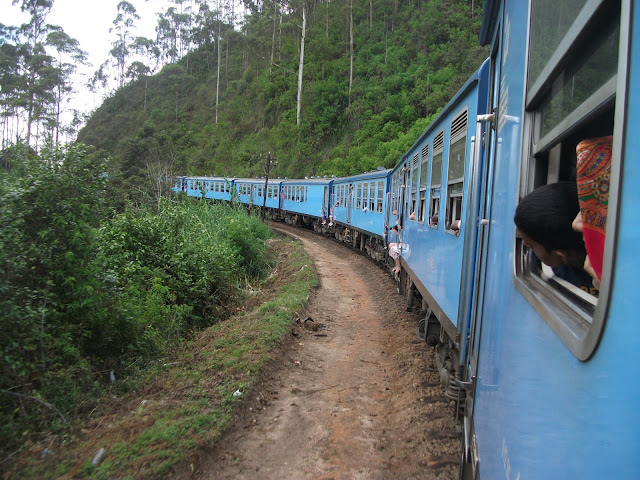 You must take the train they said, it's such a beautiful journey they said.

Over six hours to do a three-and-a-half hours car journey (at least  by Sri Lankan standards) I thought.

But they were not wrong.

If there is a list of things to do as a backpacker, it is take the train from Kandy to the small traveller's town of Ella in the teardrop island of Sri Lanka. A journey within a journey. We were hardly off the beaten track, seeing as walking out to the station platform, there were many others looking like us with backpacks. We were all in the same boat, or better said, train.

There are some experienced travellers that get all snotty about being on the beaten track, about how they boast about doing things that most others don't do. I can see the line they are trying to reason down, but I am an experienced traveller, I have been to lots of places that lots of people have only dreamed or merely thought about, and I was more than happy to be in that train and beating that track with a big stick with them all. Those who read here often will know that writing here is all about the journey, about moving forward and going places, that is what is important. On a track or not, where your mind takes you. (So I walk)

Apart from the Lake and tea museums and plantations to visit, I found it hard to relate to why there were so many tourists intermingled in to a contrast of the seemingly tranquil community bustle of the town of Kandy. Once you start heading out along the tracks and further in to a subtefuge of green, you ask the same question once again, and again after every kilometre you chug further up and in.

Tall trees lace the slopes of rolling hillsides, coconuts a plenty as if bobbing on a sea of green. You almost take for granted how many of them there are dotted around the country until you see wave after wave of them, much like the oceans and their mesmerising rises and falls of heaving blue mass.

Our slow blue caterpillar or millipede full of admiring passengers moved deeper in, each one of us a foot on its snaking body hanging out windows and sitting in open doorways. Spearhead leaves with purple undersides prevail. Bracken and large fir leaves immediatly took me back to my scouting days constructing makeshift bivouacs in the forests and moors of northern England. Speckled flowers and buttercups thrown in like spices to enhance the recipe.

From nature life you add people life. Contrary to the destructive side of the human race that is so much more evident to us as of late, these beings mingle effortlessly yet productively. They stop their tea leaf picking and hoeing and digging of the fertile earth to wave at us as we pass. Those hanging from trees pause to watch the caterpillar pass by with respect. At the same time they all are saying bon voyage, but making sure there is a message of respect gained back for what they do so well on that land.

Chug, chug along. Hoot of the steam horn. On we go.

A large white Buddha sits calmly sticking out of the trees, a beacon in the early morning forest mist as we move higher. Then the real rove of tea fields spreads out before us, green carpets managed by the busy bees of tea pickers. Ram-shackled buildings and homes of small villages mix effortlessly with bright, immaculately painted ones. Rusty, corregated iron along with terracotta tiles sit in and out of the green. As the train slows even more, you can almost reach out and shake the hands of more waving local folk as the train tracks cling to their houses. Home in to their welcoming living rooms for a cup of cha and a friendly chat.

Pulling in to stations on the way, garden-like and flowery in appearance where more travellers and locals board, the former with backpacks with zips and straps, the latter with any-which-way packs with strings and tape. Street sellers with their baskets brimming with fresh snacks, poking their heads through the carriage windows. Voices harrying and averting like as if coming down from a cloud.

Arrive in Ella and it doesn't finish there. But your backpack on and walk through the colourful town to your homestay. Spend the next few days walking for miles around, up peaks and trails and down railtracks like you are in the movie Stand By Me. Hear the chug and hoot from afar on the hillside, edging its way closer. Step aside and wave at the next caterpillar that passes you this time.

There is such a mix of ingredients that come together to see one solid landscape, a main course to fill your belly. It is much like how the mix of nationalities of the travellers on this train are together for the same thing. As I write I have the inspiration always of the Jatiluwih rice fields in Bali hanging on my living room wall, a special place I hold so dearly and vividly in my mind (Colour my life in green). Wherever we go around the world, we just need to make sure we are a digestible part of this stunning being.

All that was missing was David Attenbrough's calming tone of narration to what was one of the most satisfying 6-hour nature documentaries I have lived through. Yes, that's right, not just see, but live.
Email Post
Labels: Culture Living People Places Seasons Travelling