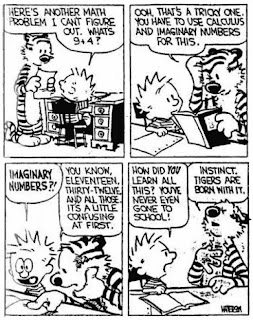 I have recently talked about people who inspire me. Well I forgot to mention one big one. Bill Watterson. Especially as he has been such a help to me this week, and it isn't the first time. Yet I have never met him. Instead I know really well his six year old cartoon kid and his stuffed toy tiger.
The kid is Calvin and the tiger is Hobbes, Bill Watterson's cartoon creation. I should hasten to add how Hobbes is a live anthropomorphic tiger in Calvin's world. I was addicted from the day I first saw the strip in the Daily Express newspaper in England. I have since bought all the books. Bill Watterson's brainchild has captivated me ever since, I have bought all the books and each one has made me cry with laughter on so many occasions.
I will never forget one time on a trip back to England. One day I was in a Waterstones bookshop with two of my best friends. By the time the two of them found me almost creased in half at the midriff and hidden in the humour section, tears rolling down my face, I had already read half of the Calvin and Hobbes book I was about to buy. I remember one of them making excuses to the girl at the cash desk (she was looking strangely at me..) as I was paying for it. I literally handed over the cash between fits of giggles. I couldn't talk. Of course one of my friends started laughing which made me laugh even more, which made him laugh more, which...well that's something that has been going on for years between us. I do remember trying to feebly justify myself to the girl by saying "Sorry..Calvin and Hobbes.." as I pointed at the book before she bagged it. It was a little embarassing for those two, but I have no shame :-D
Sorry, I need to correct myself at this point - Bill Watterson is not just an inspiration but a genius. I love the conversations Calvin has with his (toy) tiger, I love his adult vocabulary yet his low grades at school. I wish when I was six I'd had a Transmogrifier like Calvin to change me in to so many different things and not just an ordinary upside down cardboard box. The way they contemplate the meaning of life on their toboggan runs. The ways in which Hobbes pounces on Calvin the moment he walks through the door, leaving him with scrapes and bruises evident to everyone including his mum and dad is just sheer brilliance.
Sometimes I feel like Bill knew me when I was kid. When I first read the scene with Calvin and Hobbes putting the toilet roll in the toilet bowl and flushing the chain, to watch the flow and the pull of the flush take the toilet roll with it, both of them laughing their heads off, I almost died. I remember doing the exact thing about 25 years earlier. Upon reading that page and going back to see my mum, I had to make a 25-year old confession as to how come we got through so much toilet roll back then.
I would love to meet, sit down one evening and have a beer with Bill Watterson. I want to tell him how happy he has made me over the years. And also how much he has helped me like this week. Whenever I feel a bit down, Calvin and Hobbes come off the bookshelf and save the day. I want to thank him for his good deed to this world, and to mine in particular.
You have no idea how long it took me to write this entry...I couldn't resist flicking through another book, and then another. Just like Calvin gets lost in far away galaxies as Spaceman Spiff, I got distracted. I am pretty sure if we had been in the same class together we would both have got sent often to the Principal's office by Mrs.Wormwood. Now let me think what I would like to transmogrify myself in to...
Email Post
Labels: Chortles comedy People Reading