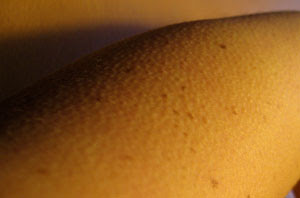 Emotions - funny things they are. Our life is full of them. They can be difficult to control, they can overwhelm us and can happen when we least expect them. I remember, fresh in to my teens at my friend's house one Sunday afternoon, watching the film Poltergeist for the first time on video after his parents had taped it the night before. How scary a film it was. Well, supposed to be. For some strange reason I fell about laughing when little Carol Anne moved across the floor upon by the 'TV people'. But I wasn't expecting that first reaction. The second time around I watched it alone and at night. I knew when things were going to happen and got goosepimples in every moment, and did shit myself anyway. My imagination is very vivid - I had trouble going to sleep that night thanks to it, checking the things in my room the morning after to make sure they were all in the same place.

Is it the person or the context? That is to say, was it because the film had been bigged up (and watching it so young, it was a big thing back then) and that we watched it during the day, or for the way my sense of humour or mind works? There are things that make me laugh at the drop of a hat (for which I usually get some strange looks) and there are things that simply bring me out in goose pimples. They could be the same thing. On some occasions they could be just a normal thing. On other days they can stop me in my tracks and take hold of me.

On one day a delicate female, manicured finger running along my neck and hairline can make me pur to sleep. Other times it can make me...well, react with a more heated emotion let's say...

There is so much music; different songs for different reasons. All great songs (too many too mention) for different emotions. Then break them down to just bits that start the upward turn of the hairs on your arm and dig deep in to those very emotions. Happy, uplifting piano riffs. Throbbing and funky basslines. Stomping, gritty guitar riffs. Stirring, swaying and moody string arrangements that make you drift with them. A drum beat that nods and toe taps you through the whole day. A deep, high, grainy, sexy, soulful, wholesome voice to take you in so many directions. Then take an occasion of music; a concert. Anybody who has been to a Coldplay concert when Chris Martin drops in the piano riff to Clocks will know just how big the pimples rise.

From sound to silence. The impeccable minute silence in a packed to the rafters football stadium following the referee's whistle signal. A sad occasion of remembrance is usually the reason, but a wonderful moment of respectful bliss. The tremendous roar and applause of 60 000 people upon the second whistle blow from the referee 60 seconds later. And then there is the national anthem in football and rugby matches as the team representing your nation lines up; the moment of belonging. The blast of the Kop as it bellows out You'll Never Walk Alone at Anfield Road. The same travelling Liverpool fans at European cup games in their small allocated corner of a foreign stadium, drowned out in numbers but by no means in voice.

The silent anticipation of 8 sprinters lined up and homed in on the 100 metres in front of them in the 2008 Olympic final. The hair raising performance of Usain Bolt storming to victory streaks ahead of the other 7...if that wasn't enough to make your hair stand on end, he stopped even trying in the last 10 metres and still smashed the world record time.

From one kind of speed to another; the shuddering start of a Formula 1 Grand Prix as the engines roar off fed on the adrenaline of the crowd as the light turns from red to green. The anticipation of the first corner. As good as it is on TV, it can't compare to trackside. The noise waves alone lifting up those hairs.

The calm after the storm. Or even sitting on my balcony on a hot summer's day as a downpour comes down. This time a little shiver comes breezing in just before the goose pimples. I once sat on a beach on Isla Mujeres, a small island off the coast of Mexico on a backpacking journey. Looking up intrigued, I remember a fluffy layer of white cloud sitting gently on a crisp blue sky, in turn resting on a bed of transparent sea azul. On the shoulders of it all a heavy burden of a thick black thunderstorm cloud edged towards us, feasting on a snack of the white-candy floss cloud and guzzling up the blue sky like a refreshing glass of water.

An instinct of picking up and fleeing would usually come over. Instead, this context wasn't knew to me and I sat and eagerly awaited. In the anticipation, my whole body looked like I had just been skinned of feathers even before the darting outburst of rain hit us, only for it to pass as quickly as it came. We didn't even move from our spot on the beach as we waited for the crisp blue and its sun to return and dry us and to flatten the hairs on our arms.

Jesus, I got goosepimples just thinking about writing this.
Email Post
Labels: Emotions