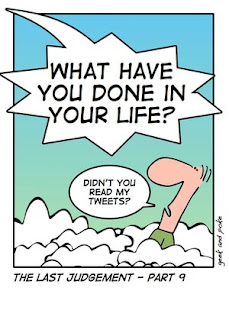 It's hard not to have noticed this year, but in the aftermath of the Facebook explosion, the new internet boom of Twitter is upon us.

I write in this blog, I read other people's blogs. I'm interested in what certain esteemed people think and what they have got to say, I can get inspiration by their written words. What I'm not interested in is what people are doing every second of the day or at any given time of day. I'm sorry, that for me is no longer interest, but self-obsession, whether it is reading or writing these "Tweets" as they are known. So saying that, it's probably not hard to notice by now by what I've just written, I would not even be considering writing in Twitter.

So I looked at what these Tweets actually are. Just a message of self-importance to a maximum of 140 characters from the slogan: What are you doing? Sounds like something for people with too much time on their hands to be honest. Moreso, and perhaps more significantly, anybody who goes on Twitter will almost surely have a profile on Facebook. Here, you can also share what's on your mind in a similar kind of status update message to go on your profile, but you can also chat, share photos, keep in touch with friends, meet new people, post groups and videos, etc, etc. MySpace is more or less the same concept.

So it brings me to ask: If you can already post a tweet-style message on Facebook amongst other things, what is the point of Twitter? What is its concept? I can't help thinking there are too many people hanging out their dirty washing on the web and swimming in a sea of mundane 140-character blah I think. That goes for Facebook too unfortunatly; I don't know how many times I see people writing written 'bored' on their status. As much as I embrace technology and use Facebook daily, if I have to get something off my chest I'll settle for a pint with a good friend in a bar or pub thanks.

P.S. Like I said, I get inspiration from certain people. Thanks to Paul at Origami Studio for this one ;-)
Email Post
Labels: Social networking Things