Kids in a playground 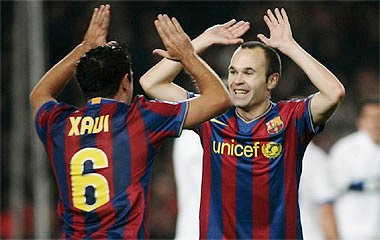 Being from the north of England, I cannot help but like Reeves & Mortimer. Their humour is right down my alley. Let's say it's particular, even some people from the south don't get it. I can't help but down right piss my pants laughing at those two. They must have, in my mind, the ultimate imagination. How else can men in bras, hitting each other with frying pans and all those games they invent for the final challenge in their show 'Shooting Stars' make people laugh? They are almost on another planet. But a planet I take regular trips to.

They are a double act, and in comedy there have been a few. Morcambe & Wise, the two Ronnies just to start and how can I forget the Monty Python gang? They come from the same planet as Reeves & Mortimer, they actually live in the same town and street. Wavelength Road.

Last night I watched another great double act on the TV. They weren't funny in any way. Actually, they were very serious, and very, very skillful. And they were very much on the same wavelength. I'm not talking about a comedy show, but a football match. Last night I watched 'el clasico' - the match between Real Madrid and Barcelona in the Spanish Liga. Barça beat Real this time around. Actually Barça destroyed Real 5-0. And orchestrating it all were the midfield double act of Xavi and Andres Iniesta. They were all over Real Madrid and it was a joy to watch them play.

Their passing is sublime, their vision, intuition and how they make all things look so simple is captivating. How they know what each other is going to do, and how they work off each other. Even Giovanni Van Bronckhurst, the losing Holland captain in the World Cup final against Spain (who also played for Barça) once said: "they have a special relationship, they always have, they just seem to know where the other one is". They also do the same for the national team, except they swap shirts. For Spain Xavi wears no.8 and Iniesta wears no.6 instead of vice-versa for their club. I remember as a kid swapping coats with a junior school friend in the playground, they are just like that. The pitch is their playground and they have lots of other friends to play with, but they are always united and on the same side.

And it seems that in their job they are always having fun. As kids can you ever think of a time when you didn't have fun? Everyday was play day. You would cry and spit out your dummy and throw your teddy at times, but fun was always there to take over. That is what it is like for Xavi and Iniesta. They may lose matches (not at the moment though...), but there is the next one around the corner. Every day is a play day. For Reeves & Mortimer too. I don't think they actually ever left the playground... (I met Bob Mortimer once in a bar I once worked in; it was like being on the telly in one of their sketches, he's exactly the same).

People always tell other people to grow up. But the thing is, is it in our DNA to completely grow up? Maybe this world really is just one giant playground. What we have to do is just find the right wavelength to play in harmony. Every day is a play day.

I can't wait to get back playing hockey. I see kids with Iniesta shirts on after the World cup kicking a ball around and playing and dreaming of being like him...or maybe an astronaut, or a racing car driver, or train driver, or...
Email Post
Labels: Character comedy Living People Sport Tributes