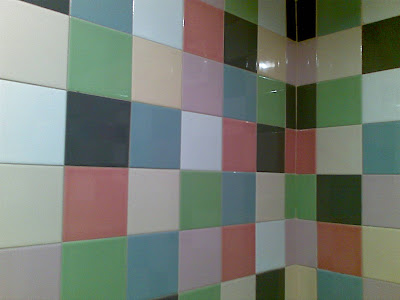 So, incase you were wondering, yes, this is a photo of a wall. Well, two walls actually, or a corner, or whichever which way you want to look at it, but you can see from the tiles right?

Your next questions I can see coming, which I can understand them being more significant: Where is this wall? Why the hell are you taking photos of walls/corners?

Well, firstly this is a photo of the Male toliet in a bar I was in the other night. Which probably leaves your best question for last: What the f*!k are you doing taking photos in the male toilet?!? Which leaves me to justify myself by saying I was having a Hemingway moment. That is, I had a moment after a few mojitos where my mind takes over and sort of gets creative, or more accurately just 'goes of on one by itself' and tells me to just sit there, shut up and hold on tight.

The thing is, as random and irrelevant all these coloured tiles in any random bar on any random night, in any given place, for me, was anything but random. Despite the Mojitos and not being in Sloppy Joe's. When the though hit me I had to be careful and concentrate on where I was aiming if you know what I mean. Not because of the mojitos, but because I was focussing too much on the wall. This wall/photo was like the finished painting of where I am right now.

Before walking in to that toilet I was sat at a meltin' pot of a table with people of various nationalities, mainly work colleagues. Just like at work in my new job in Spain the general language was English, but many others are fired across and floated over the table, weaving between the glasses of after work aperitivo. Not just their own mother tongues but other languages they speak too.

I was speaking to an Italian, in Italian. Then turned to speak Spanish with a Spaniard, then back to English with a Finnish colleague. That same colleague speaks with a Swedish colleague in Swedish who then speaks in English to another. Around and around it goes, a mish mash, throw-it-in-the-pot-and-see-what-cooks.

In my office I have a colleague who speaks 5 languages fluently, switching between them with the snap of the fingers, without a thought. After a few too many mojitos at at the same snap I was speaking Spanish to an Italian, and vice versa. Something is missing in my recipe. It's one of those few times when I get jealous in this life.

But just focus on that wall and those tiles for a moment. Let's say the blue tile is Swedish, the white tile English and the red one Spanish. The red tile sits on the wall next to the Swedish blue one and they get on together, the blue turns to the white one and they do the same. On the other side of the white tile is a green one, an Italian and they sit nice together. And so the pattern goes. there is maybe no order or formation, but they are all stuck on the same wall and form a multitude, kaleidoscope of colours that goes around and around, and it works.

They say the world is an oyster, or in Italian they say a village. But it is also where two toilet walls meet.
Email Post
Labels: Culture Living People Places Social networking Thoughts Travelling