I perceive, therefore I am 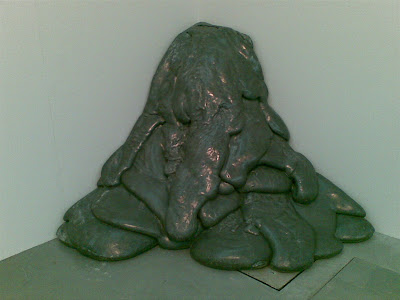 The Clash once sang London calling. Well, it calls me every now and again and I just have to answer. Even moreso now I have one of my best friends living there. I was celebrating another birthday with two guys I grew up with and chilling out talking football and drinking wine, beer and well...pretty much anything really.
But there was one thing I finally got round to doing which I say I will do on every trip to the Big Smoke and that was to go to the Tate Modern Gallery. This time I made a point of it, one morning impressively without a hint of a hangover getting off the Tube at Westminister and dawdling along Queen's Walk before coming to the impressive brick-block of the Bankside ex-power station.

Once inside and mooching between the rooms, it felt like the first time there, it had been so long since the last time. Maybe that's the beauty of an art gallery and it's changing exhibitions; not so much the art itself but the fact there is always something different to offer, it explores change, it beholds many points of view. It is like seeing the same world through different eyes. There is always something to discover.

This time round I ventured in to the area named Arte Povera - quite literally 'Poor Art' in Italian. An raw area of sculptures made from anything the artists could get their hands on. Usually art for me is pretty much black and white - I either I like it or I don't. It was a different feeling I got in that area. It was like going in there I really wanted to like it before I saw anything. Maybe it was the words in a language that has become implanted in me, maybe it was just because it sounded different. Still, some things were beyond me, I couldn't see the artistic value behind, even their wall plaque explanations didn't help me get a grasp, if anything, just adding confusion. I suppose that's art, it's all about perception.

Then I came across one corner of a large white-walled room with the sculpture in the photo above. This intrigued me from a distance. I kept on staring at it ignoring and paasing by the two sculptures down the wall before getting to it, making its claim of the high, white-walled room corner. It had my undivided attention. 'A quartered, lead meteor' is what this sculpture is by Lynda Benglis. She wanted to suggest bodily and geographical flows. The title indicates a divided astral mass. At least, that was the suggestion on the plaque next to it. I had to think about that for a moment and well, accept her explanation, after all it is her work.

I personally could see an elephant.
I perceive, therefore I am.
Email Post
Labels: Culture Design Places Travelling