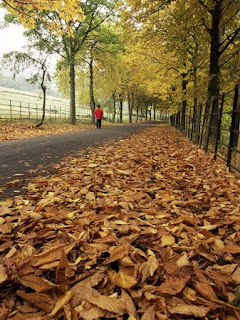 I guess I have been lacking a little inspiration as of late...just one of those things I suppose that happens to anyone who writes. Just one of those periods where nothing makes it's way out of the caverns of my mind despite my torch-in-hand inquisitive searching through the cobwebs. That was until the leaves started falling off the trees.

Autumn is upon us in full season and the leaves are detaching their anchors from their branch docks and drifting their way to ground level. As each day passes the ground gathers more browns, yellows, beiges and hazy greens, momentarily swamping the lush green of the grass. That's what it is like as I walk through the park in this period anyway. You think of Autumn, or 'Fall' in American English, and you think of New York, but for me the colour of the leaves blend perfectly with the sunshine and terracotta roofs and buildings which are characteristic of the historic Italian city. It is like Bologna was made for Autumn.


Back in February I wrote about walking in the snow (http://andrewgranville.blogspot.com.es/2009/02/snow-this-week-has-caused-disruption-on.html) how I loved the sound of the scrunching snow underfoot. Well as the leaves fall, the underfooting just keeps getting more crackalackin', as Marty the Zebra from the film Madagascar would say. I used to live in an avenue with big trees all the way down it. In this period there was always an old guy across the road from me that would be up at the crack of dawn with his rake and gather up all the fallen leaves in to neat piles. I hate that. I mean, I understand why he does it and respect it; I lived in another street once where the were loads of pine trees and the pine needles are annoying everytime they litter the street and even make it difficult to walk on. But not normal leaves. Every time I saw him doing it when I left for work each morning, I wanted to run across the street and jump in them and throw them around all over again. Roll in them and flay my arms and legs around in a messy autumn version of making snow angels. I wanted to run along the street and kick the neat piles in to oblivion.


I supposed that was just the kid in me, but thinking again, I don't think completely so. It is because it is nature, it is natural to see them fall on to the street, painting the concrete with colour. They lay, not litter, like the pine needles do. Goddamn it, leave them as they are, they are crackalackin'!


As a kid I liked picking up leaves and scrunching them in to bits in my hand. It is just like when I see a smooth layer of crisp untouched snow, I just have to, er I mean had to jump in it and mess it up. Maybe that's my destructive side coming out, but hey, the leaves are already dead and that's just what boys do so there. Hm.
In the days before non-dog pooper-scooping was a fineable offence, we would pile up leaves around a nice big dog poo on the ground and hope some other unsuspecting fellow youth would come along and kick them, or even jump in and roll around it :-D Especially on the 30th October, the night before Halloween, which in England was always mischief night. But that's another story and another childhood grounding.
Email Post
Labels: People Places Seasons