A day in the life of a Rubik's cube 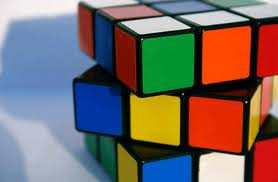 On Facebook this week I saw a photo of a friend dressed as a Rubik's cube. No it wasn't a off-the-wall fashion statement, but for a fancy dress party. She had pulled it on over herself, after covering her whole body in a black leotard from head to foot. It actually was quite an entertaining thing to do, even if somewhat bulky and not exactly easy to dance cheek-to-cheek.
Firstly it got me thinking - as my warped mind does - of the New Order video to 'True Faith'. You know, the one of people dressed in strange shapes and colours, dancing and running in formation, bobbing up and down, slapping each other to the beat of the music, doing something like capoeira, and rotating on a pivot doing sign language in camouflage headphones and a 'turtle suit'. All bizarre, but fun. Bizzare (and leisurely warped) is always a bit fun at the end of the day. Or is that just my mind whispering to me as I write trying to justify itself?
After spending the rest of the day singing "I used to think that the day would never come; I'd see the light in the shade of the morning sun..." (the lyrics, not my own philosophical outlook on life - not at that time of the morning anyway) I thought back to the Rubiks's cube. All it's colours, six of them; six sides, nine squares making up each side. Roll it like a dice, get a colour. It is like there is a colour for every aspect in life. Each aspect is broken down in to it's nine smaller squares.
But the Rubik's cube is not that simple, just like life. Once the sides have been muddled up and each small square jumbles in to an explosion of colour like some sort of iconic Picasso masterpiece. Hours and days (and if you are like me..a whole childhood) were given up to solving the puzzle, getting all the colours linked back together again. Just like life. It's never easy to do, to judge or to intepret. But we have a damn good go of doing it.
That mixed up cube is never complete, maybe just like life. Even if we do complete it we have to jumble it up again and restart the process, just to prove it wasn't a fluke the first time around. And then again, and again. No wonder it sold millions, it has made an everlasting stamp on our lives. Our grandchildren and their grandchildren will surely know what a Rubik's cube was...or is.
Like the cube, we'd like life to be complete. Or would we? Would we get satisfaction out of it that way, or would we always need to have something to aim for? I think we would need more, it's our nature, it's how we evolved. Moreso, I'd like to think so anyway. I have personally never completed the Rubik's cube, not even once all the six sides. Three yes, only half of it. I even pulled it all apart a couple of times, forcing it in to little bits and put it back together like a jigsaw, with all it's sides perfectly completed and united. It looked good, I had completed it (I'd like to think I could beat the system at the time :-D) but there was no real satisfaction in it, not even for this 10 year old.
So I will officially declare I only completed half of it properly. But like the challenge of life, I'd like to look at it as a glass half full, not half empty.
I ended the day and my train of thought with It's a Knockout again, Stuart Hall laughing at people falling over in big, silly costumes, and everyone asking me what is so damn funny about the Belgians...you had to be there really. I'll leave you to work out your Rubik's cube.
P.S Just incase you I had no idea which New Order song I was talking about, it wasn't a figment of my imagination, here's the link:
http://www.youtube.com/watch?v=og1HAkjOuL0
Email Post
Labels: Attitudes Emotions Living Music Things